The future of unmanned war takes a halting step closer... 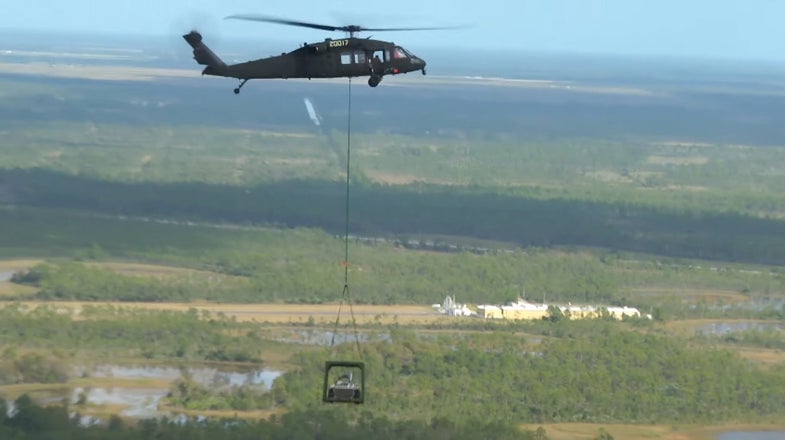 Robots are part of the future of war. They’re not the present, yet, and robots replacing all humans on a battlefield is still a long way away in the futue — it if happens at all.

But that doesn’t mean robots aren’t coming. The current phrase-of-choice at the Pentagon is “manned/unmanned teaming”, where human piloted and autonomous vehicles work together to perform a task or take an objective.

Someday, it’s entirely possible that we will simply have unmanned/unmanned teaming, where robot helicopters carry ground robots into battle. And by “someday,” I mean “last October,” when the following test was performed in West Palm Beach, Florida.

After the unmanned helicopter lowers the robot onto the ground, the ground robot rolled out to explore the surrounding woods.

This project has been in the works since at least the summer of 2014. The video was uploaded earlier this month and the announcement emailed out today, with the demonstrations taking place on October 27th.

The project, it should be clear, was sponsored by the U.S. Army Tank Automotive Research, Development and Engineering Center, with a helicopter provided by the Army’s aviation and missile research wing. To make it work, Sikorsky outfitted the Blackhawk with their autonomous kit, which can be added to existing vehicles.

Like most robots operating on the edge of conflicts and dangerous situations, the ideal use of this team isn’t to replace human pilots and troops in battle. Instead, the robotic scouts can go places humans shouldn’t, like environments where commanders suspect radiation risk or loose chemical weapons, to identify the danger and then see if it’s safe for humans to go. In this role, robots themselves become the future scouts of nightmares, their unfeeling mechanical bodies clearing a path for the war to follow.

Watch video of the demonstration below: