Now if only scientists can establish a longer, stronger connection 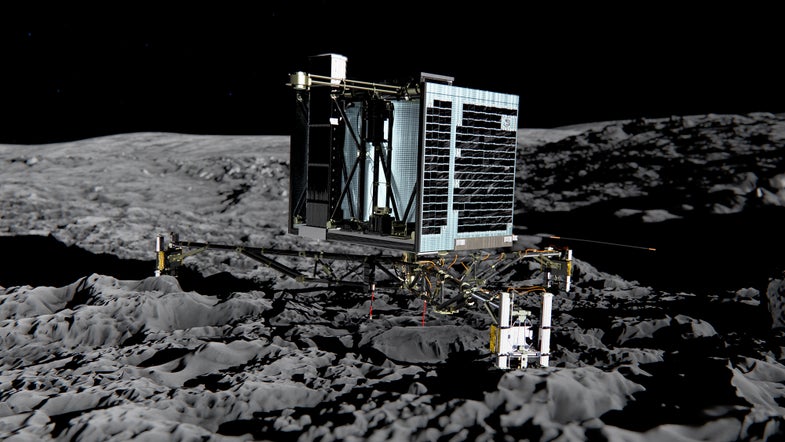 Last year, after Philae crash-landed in a dark spot of Comet 67P/Churyumov-Gerasimenko, the spacecraft went offline for seven months. The lander came out of hibernation this past weekend, contacting ESA headquarters twice. Today the team managed to get in touch with the lander a third time, and the connection lasted a total of four minutes, compared to just a minute-and-a-half last weekend.

The stronger signal is heartening, but the Rosetta team is hoping to do better. In order for Philae to start collecting science data again, they’ll need to establish a connection with the lander that lasts for tens of minutes, Philae manager Stephan Ulamec told Popular Science. He declined to elaborate on what the team will try next to make it so.

Philae communicates via the Rosetta orbiter, which relays the signal to Earth. So, in a risky attempt to hear the lander better, scientists moved the orbiter closer to the comet’s surface this week. The brave move clearly paid off; the connection was more stable than before, despite a few interruptions.

Info from the new transmission confirms the initial indications that Philae is feeling alright. It is warm and getting plenty of sunshine, which means its batteries should be able to store enough energy to keep the lander working through the night. That is, if scientists can get a stable enough communications link to give it some instructions.