Barely a day goes by without a new development in smart car technology, from computerized cars to driving directions. Now... 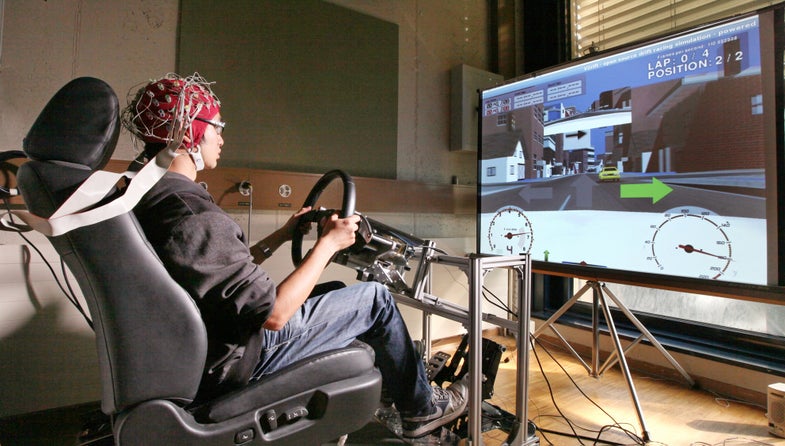 Barely a day goes by without a new development in smart car technology, from computerized cars to driving directions. Now researchers in Switzerland are developing cars with the ultimate gift of intelligence: The ability to read our minds.

Researchers at EFPL have been developing thought-controlled wheelchair systems, and now they’re taking their motion-control tech to the road, working with Nissan to build a system that can anticipate a driver’s next move.

Using environmental and biometric indicators, cars will prepare themselves for an upcoming task the driver already has in mind, maybe slowing down to ready for a turn, or changing lanes in anticipation of a highway exit.

“The idea is to blend driver and vehicle intelligence together in such a way that eliminates conflicts between them,” said José del R. Millán, a professor at EPFL who is leading the research project.

It will use sensors embedded in the car, as well as brain activity and eye movement patterns, to anticipate what’s about to happen. Many brain-machine interfaces rely on mapping brainwaves, which requires lots of initial testing to determine a user’s patterns, not to mention really deep thought to make sure there are no mixed signals. For instance, this German brainwave car we saw last winter uses the Emotiv EEG headset, which correlates brain activity to a certain command. But it has a several-second delay, definitely too long for a real-life road reaction.

EPFL says their new system also uses statistical analysis to predict a driver’s intentions. It would conceivably work faster, so the car would know you’re thinking “turn left” before you actually start actively thinking it.

This may be a unique system for cars, but the military is already planning an anticipation system for drones. That system would use data from air traffic control and model how piloted planes take off and land. So could a similar driver-behavior system could someday be used for fleets of autonomous cars? For now, we’re OK with our cars helping us pay attention to the tasks at hand.