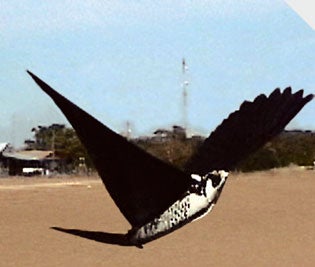 There’s a deadly turf war in the sky, and it’s birds against jets. No joke: Seven years ago, 24 people died when an Air Force surveillance jet crashed in Alaska after geese flew into the engines. Though not usually fatal to humans, such collisions result in an average of $500 million of damage each year. Most occur during takeoff or landing, so airports have experimented with a variety of techniques to shoo birds away: everything from shotguns to fireworks to recorded avian distress calls. But Wilfred Emonts believes he’s got the right mixture of nature and high-tech: Robofalcon.

Emonts, a renowned breeder and trainer of falcons, was hired two decades ago to keep birds away from Toronto’s Pearson International Airport. His falcons would circle the airport, scaring off everything else with feathers. But they didn’t chase the other birds long or far enough to keep them frightened. “If a lion ran for 20 feet or so and then gave up every time it chased you, you’d stop being afraid of it too,” he says. The inspiration for Robofalcon arrived a few years ago as

Emonts stared at a toy ornithopter (a contraption that flies by flapping its wings). He enlisted Sean Kinkade to design an ornithopter that would “work just like a real falcon” but could be controlled by humans. His company, Intercept Technologies, is now offering Robofalcon in various sizes and species: from Peregrine Falcon (for scaring small birds such as starlings) to Golden Eagle (for larger birds such as turkey vultures).

Robofalcon gets almost all of its lift and thrust from its flapping wings, while the tail acts as both elevator and rudder. It can brave 25-mph winds and, best of all, uses a mechanism adapted from radio-controlled boats to lock its wings and soar.

Emonts is now marketing Robofalcon to airports, landfills, and golf courses. But he still wants to make it more realistic. “Maybe in the future,” he says, “it will be able to perch on a building.”