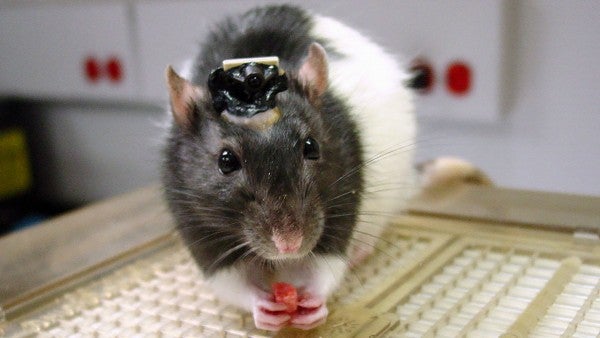 Researchers at Duke gave rats an extra sense, and all it took was a little bit of brain surgery. With external hardware hooked into their brains, rats can see infrared light, and navigate it well enough to find rewards. The research builds on a previous study where Duke University’s Miguel Nicolelis and Eric Thompson used a single implanted electrode to give rats a vague sense of the infrared world.

In the first project, the rats had electrodes attached to their sensory cortices, and fed information from a head-mounted infrared sensor, which stimulated part of the brain whenever the rats got closer to a source of infrared light. With this sensor, rats could work their way to a water spout placed below an infrared emitter, but it usually took the rats almost a month to figure out what, exactly, their new sense was telling them.

In the newer version of the experiment, they first spaced out electrodes around the previous sensory cortex. Roughly, it’s the difference between playing a game of hot/cold and using a compass. More input about where the infrared was coming from meant the rats could navigate by it better. To make the rats even more adept at infrared navigation, the researchers then attached the sensor to visual cortex. From Science:

That’s like moving from a vague notion of infrared, to a rough compass, to navigating almost by sight. Previously, Nicolelis has combined brain implants with exoskeletons in an attempt to restore mobility for humans with disabilities, but his latest isn’t about repairing a failing sense, it’s about adding a new one. Just for rats right now, though some biohackers are at work trying to create working infrared vision for humans. One that happens to be great for finding still-warm pizza, or identifying mutant ninja turtles in sewers that just so happen to need a new master.