But we’ll have to get there first. 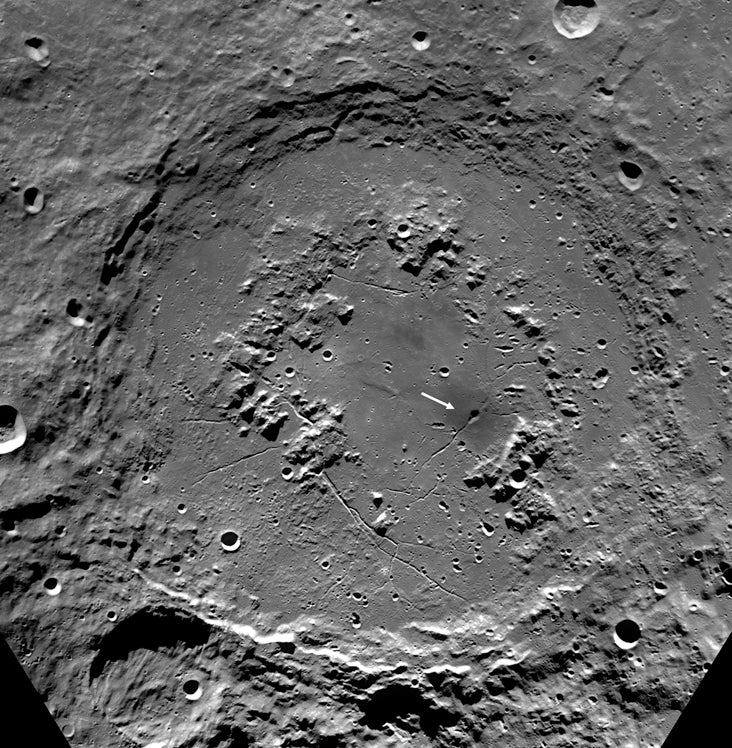 The Schrodinger basin on the Moon. NASA/GSFC/Arizona State University
SHARE

The Moon hangs luminous, beautiful, and just out of humanity’s reach in the sky, just like it’s been for the past 45 years—since the last astronaut lifted his foot off the lunar surface and headed back down to Earth.

Earlier this month, Vice President Mike Pence announced the administration’s intent to send humans back to the Moon for an extended period of time, without outlining a specific plan for financing and equipping the expensive endeavor. NASA has 45 days to come up with a plan that includes lunar exploration.

This decision does not come without controversy. Some argue that the United States should keep to the path it’s trod for years, slowly heading towards Mars without a Moon stopover. Others think that we should focus on the many issue on our own planet first.

Then there’s the track record. If you look back through history, presidential lunar aspirations haven’t had a decent success rate since Kennedy.

But lets say, just for a moment, that it all works out, and we do head back to the Moon. What’s left there for us to learn there?

“People have the notion that we’ve been to the moon and therefore we’ve explored it,” says David Kring, head of the Center for Lunar Science and Exploration at the Lunar and Planetary Institute. “That really is a concept that need to to be corrected or erased, because it’s just wrong”

Kring points out that if Buzz Aldrin and Neil Armstrong had landed on the National Mall, they would have only explored an area the size of the footprint of the Smithsonian Castle. They wouldn’t have gotten anywhere close to the Capitol building or the White House, much less other parts of Earth. The moon is small, but not that small. It’s over a quarter the size of our own planet.

Later moonwalks explored more of the Lunar surface, but were still relatively limited by time and technological constraints. Still, the Apollo-era samples of moon rocks, and of the Moon’s dusty blanket of regolith (the Moon doesn’t have soil) have informed decades of research telling us more about how our companion formed, what it is made of, and in the process, how we all got here.

With a surface that has been practically frozen in time, the moon is a geologist’s dream. Its surface is free of vegetation that could obscure informative outcroppings of rock, and its crust isn’t being continuously recycled in a vast tectonic cycle like our own planet’s surface.

“The geologic record that is preserved on the Moon is completely unparalleled anywhere in the solar system,” Kring says.

But geologists aren’t the only ones itching to get more information out of the moon. The lunar surface holds records dating back to around 4 billion years ago, when the inner solar system was getting pounded by an influx of meteorites that created an environment hostile to life—not just on the Moon, but on Earth as well. Nonetheless, life emerged around that time.

Gathering more data about that era—we still don’t know the cadence with which large meteorites and asteroids smacked into our Earth-Moon system—could help inform the work of not just geologists, but evolutionary biologists, astrophysicists and astronomers, all seeking to understand more about how we got here.

Future missions would likely be a combination of robotic and human endeavors, with robots doing some of the initial scouting and humans either remotely guiding rovers, or working with them on the satellite’s surface.

In terms of where on the Moon would be best to answer some of those big questions, a few spots have already been singled out. Back in 2007, a report from the National Academies outlined the scientific goals for future moon exploration. A subsequent analysis selected the Schrödinger and South Pole-Aitken basins (on the far side of the Moon) as places where future missions could both safely land, and look into many of our most pressing scientific questions.

Those locations had other benefits, too. From an exploration perspective, targeting the far side of the Moon would mean landing where no one has (softly) landed before. (Plenty of spacecraft have crashed in that area.)

In addition to scientific exploration—and exploration for exploration’s sake—there’s also resource exploration. Many different countries and corporations with the Moon in their eyes are especially interested in figuring out how to mine it for ices and gases that can be turned into fuel, water, or air for astronauts.

“It would make exploration of the solar system easier if you had resources outside of earth’s gravity well,” Kring says. “If, in fact, the Moon does have significant caches of water ice, that would greatly extend our ability to explore the rest of the solar system.”

The idea has captured the imaginations of groups around the world, from NASA and Roscosmos to Moon Express and Jeff Bezos. Projects like the international Deep Space Gateway, which would orbit around the Moon, are starting to take shape, and spacecraft are currently being built to get us there.

There’s still plenty to discover, and many worlds to explore. Including our neighbor, a short three-day rocket-ride away. All we have to do is figure out how to pay for it.