So don't panic. Or maybe do panic, but about science news? I don't know. 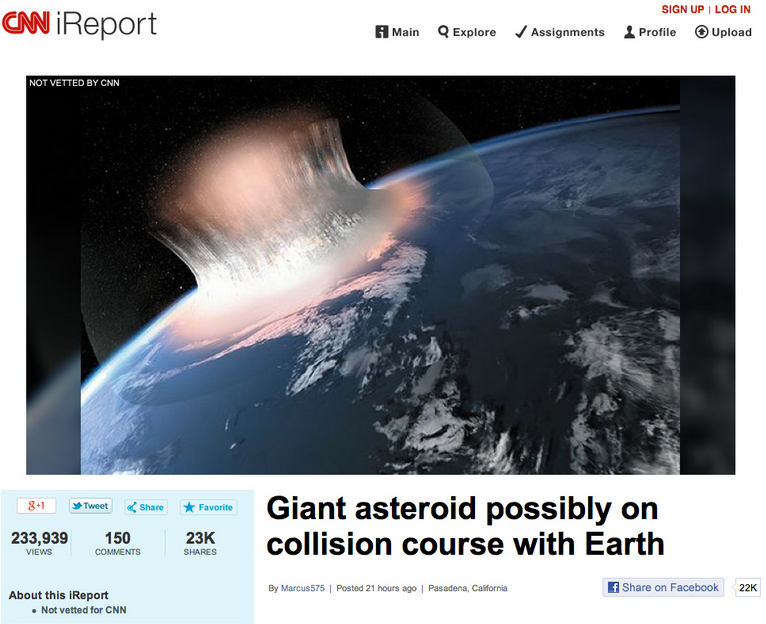 If you’ve watched CNN for a moderate amount of time, you’ve likely seen an ad for iReport, the network’s user-generated news hub. Civilians suggest stories, and CNN publishes them, on the web or on the air. Not a bad way to get boots on the ground where you normally couldn’t, except for the occasional troll, like the one who posted a completely bogus story about an asteroid about to demolish the planet. The article racked up more than 200,000 page views before it was pulled.

The story, first spotted by NASA Watch, claimed there were about 50-50 odds of a devastating collision. This is a lie. There is no such asteroid; NASA never said this, according to NASA. So what exactly happened?

Anyone can contribute to iReport, and someone contributed this semi-realistic (but comically overwrought) post. Readers spread the article — it has 23,000 shares on social media, which is formidable — and eventually 200,000 people saw it, most presumably thinking it was real news, stocking their bomb shelters accordingly.

CNN vets some iReport stories, checking them for accuracy and eventually stamping them with a note of approval. Others get only a “NOT VETTED BY CNN” mark on the image and above the name of the user who submitted the post. (In this case, that user is Marcus575.) CNN didn’t exactly “run” this story, but it did stay online for 22 hours before the network took it down, with this note now accompanying it:

You can call this a cautionary tale against user-generated content, argue that CNN should have done more to clarify that the story wasn’t vetted, or simply call the situation a hazard of modern media. Either way, some people are relieved right now.