Zooming In On Pluto And Its Moons

The latest and greatest images from the New Horizons mission 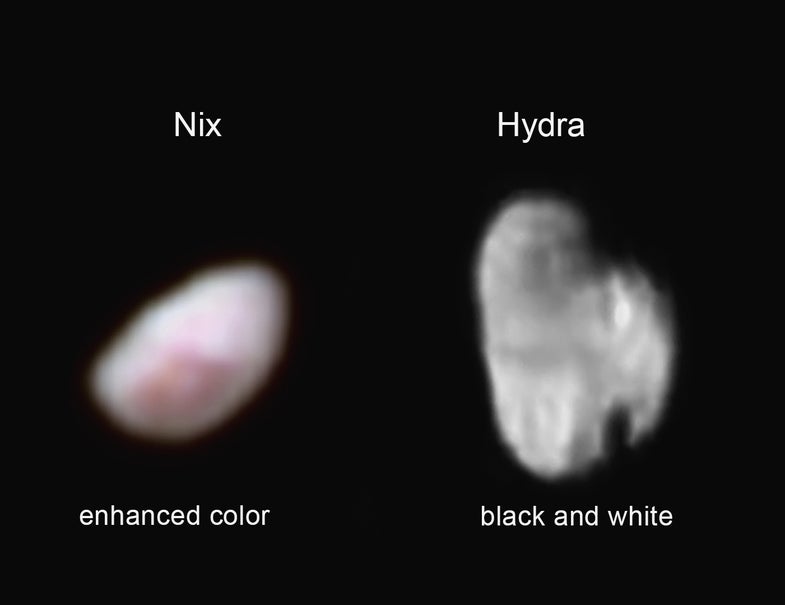 New Horizons captured these closeups of Nix and Hydra, two of Pluto's smaller moons, during the July 14 flyby. Nix turns out to be jellybean-shaped, and in this image, it's even colored like one. Although Nix is not pink in real life, one region does have a reddish undertone that's exaggerated here. Scientists aren't sure where the moon's tint is coming from, but the bull's eye pattern indicates it could be an impact crater. Meanwhile, the irregularly shaped Hydra has a dark spot on top that could indicate a difference in composition. NASA/JHUAPL/SWRI
SHARE

A manmade spacecraft will fly by Pluto for the first time ever on July 14. As it speeds through the Pluto system at 35,000 miles per hour, the New Horizons spacecraft will send back the first closeups of the former planet and its moons. The spacecraft will only be in the Pluto system for 12 days, but it will gather a wealth of information and, over the course of the next 16 months, send back imagery that will give us a much clearer view of this mysterious icy world. We’ll update this gallery with the incredible images as they come in. The Appalachians Of Pluto

A second chain of mountains lies to the northwest of Pluto’s Norgay mountains. The new mountain range, discovered in images that New Horizons beamed back to Earth on July 20, are estimated to be a quarter or half the size of the Norgay peaks, but they’re impressive nonetheless. To the west of the mountains, a dark, cratered area indicates an older crust. 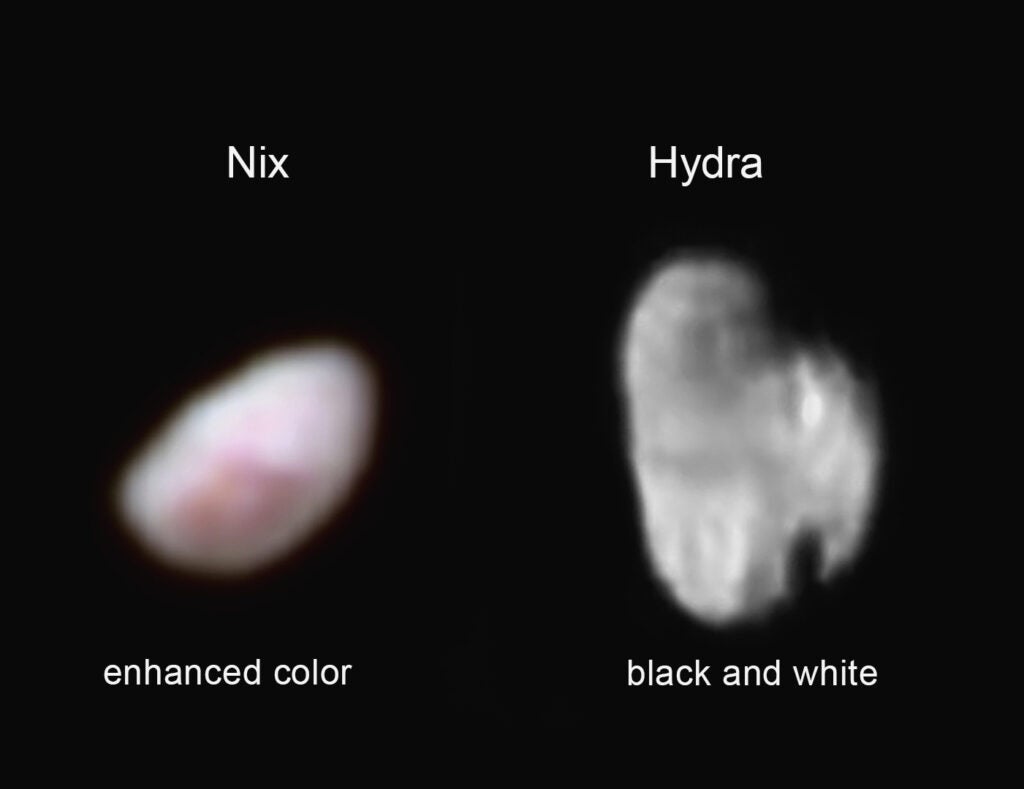 New Horizons captured these closeups of Nix and Hydra, two of Pluto’s smaller moons, during the July 14 flyby. Nix turns out to be jellybean-shaped, and in this image, it’s even colored like one. Although Nix is not pink in real life, one region does have a reddish undertone that’s exaggerated here. Scientists aren’t sure where the moon’s tint is coming from, but the bull’s eye pattern indicates it could be an impact crater. Meanwhile, the irregularly shaped Hydra has a dark spot on top that could indicate a difference in composition. 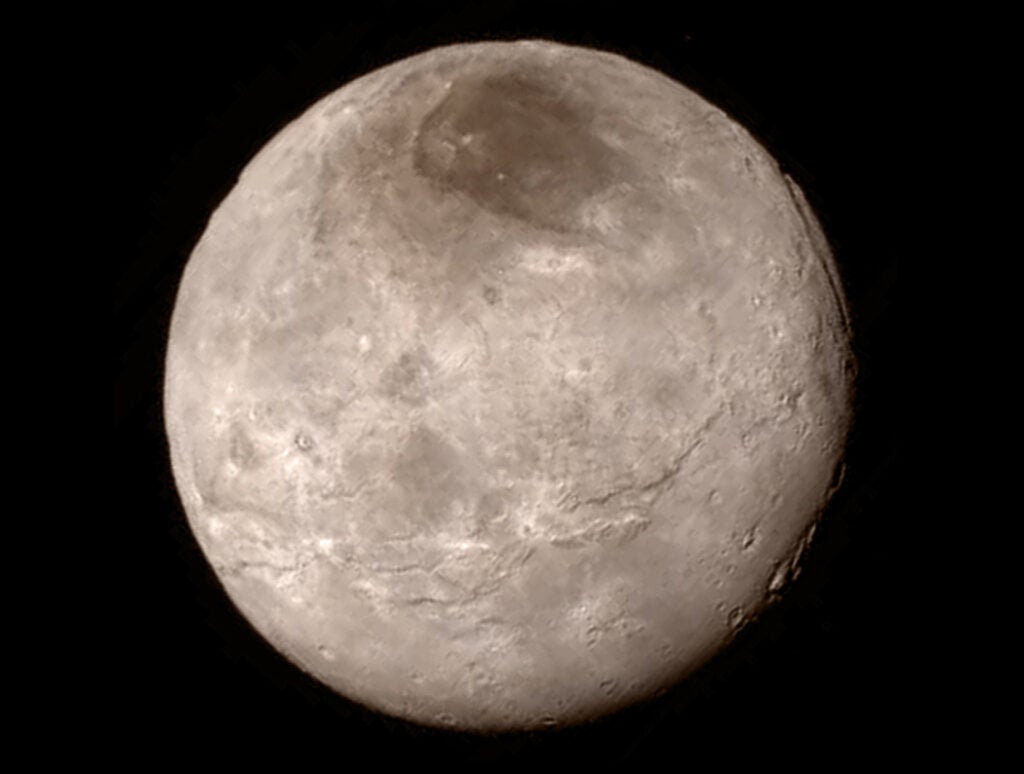 Charon Has A Youthful Glow

Pluto’s moon Charon is proving nearly as interesting as the dwarf planet itself. New imagery captured by NASA’s New Horizons spacecraft during its flyby on July 14 shows off a rugged terrain of cliffs and troughs, likely caused by the fracturing of Charon’s crust and other geologic processes. A canyon running from left to right is estimated to be 600 miles long and 4 to 6 miles deep. Bright spots in Charon’s dark northern pole, which is red, suggest the shade is just a veneer, and that impacts are exposing the underlying composition of the moon. Notably absent from the picture are many craters, suggesting again, as on Pluto, that the surface of this world is young and still active. 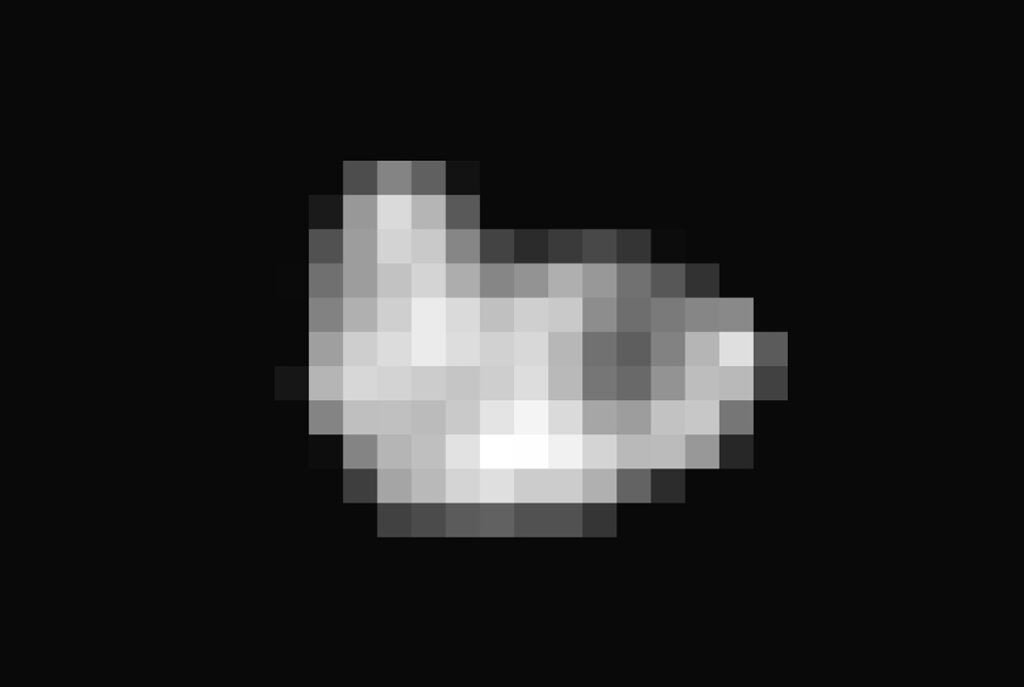 Pluto’s small moon Hydra measures just 27 miles by 20 miles, but its “potato” shape was captured in greater detail than ever before when NASA’s New Horizons spacecraft flew by on July 14. The new imagery reveals dark blotches on Hydra, with reflective white space in between, suggesting the moon — like its nearby sibling Charon — is probably covered with water-ice. 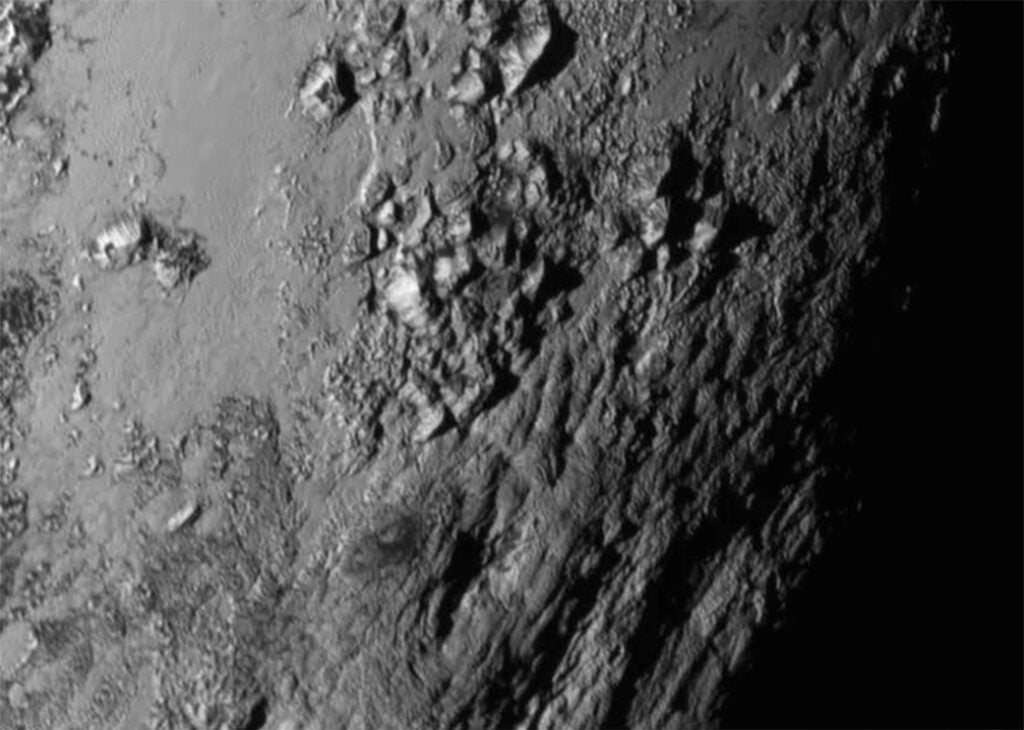 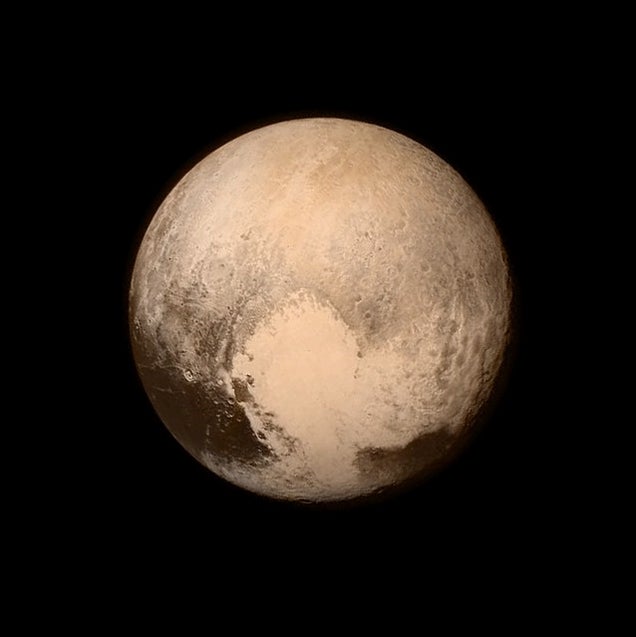 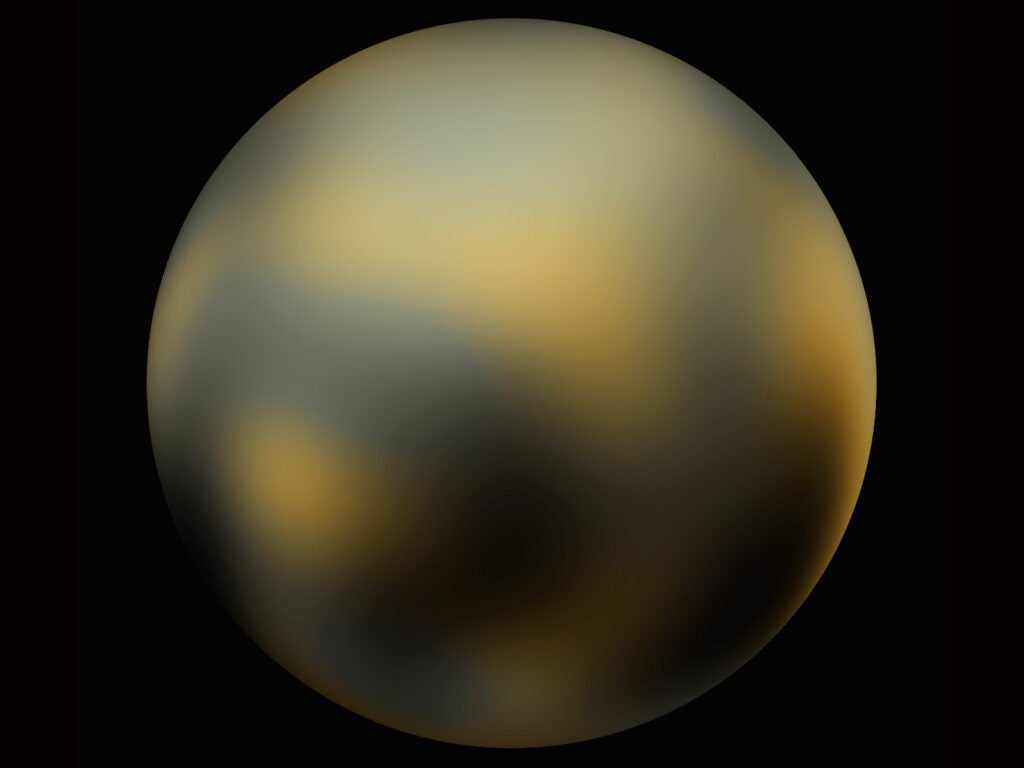 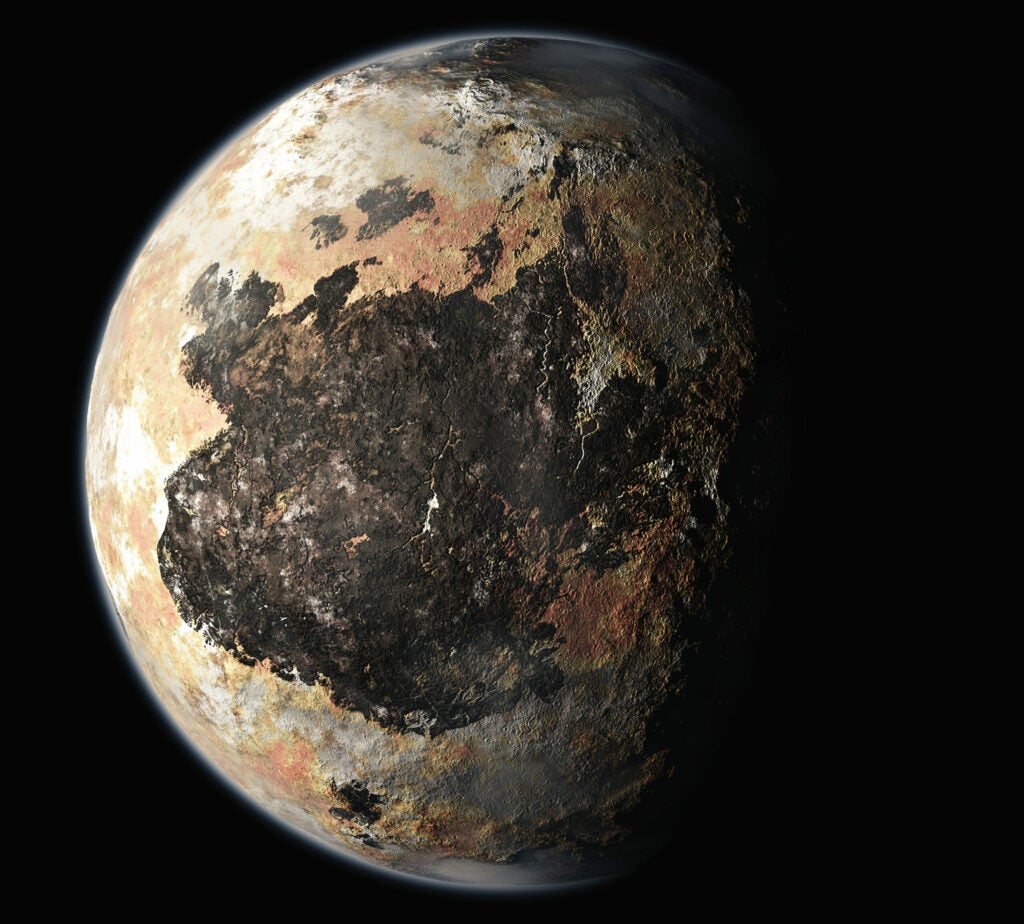 Scientists imagined Pluto might look this when New Horizons arrives there on July 14. Was it accurate? Only one way to find out! 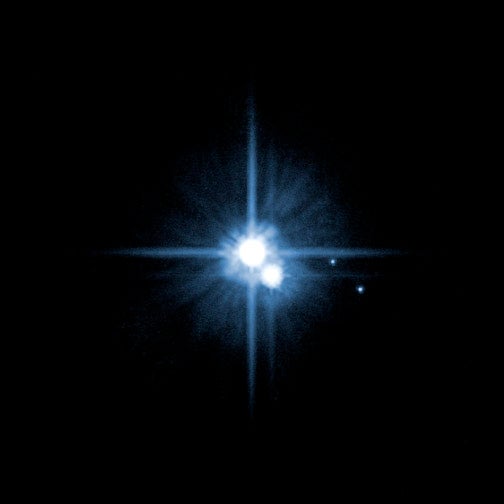 A Hubble image from 2005 helped astronomers confirm two new moons in the Pluto system. The bright spot at the center is Pluto, with its largest moon Charon just below. Off to the side are the tiny newcomers Nix and Hydra. 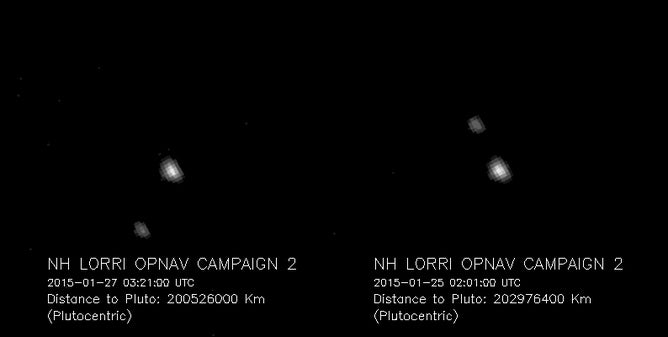 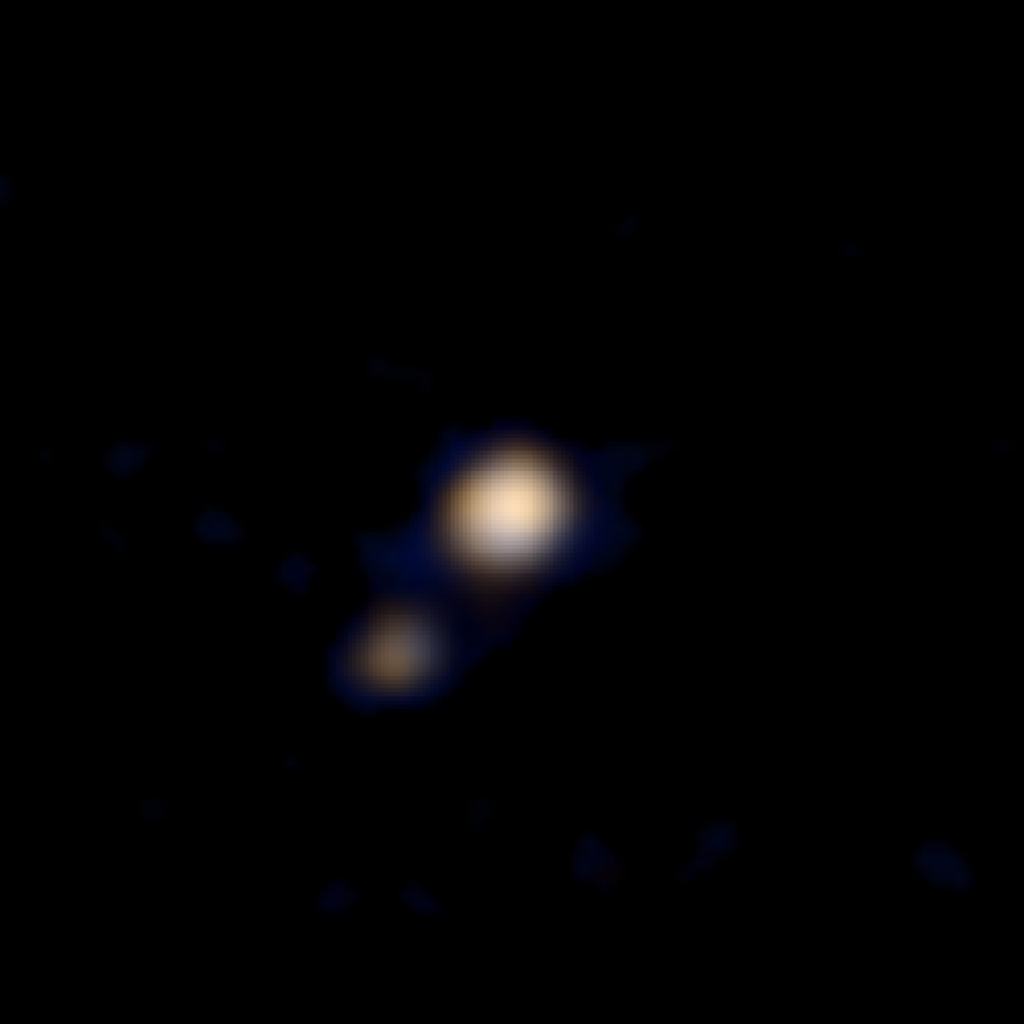 The first color image from New Horizons came on April 9, 2015, from a distance of 71 million miles. 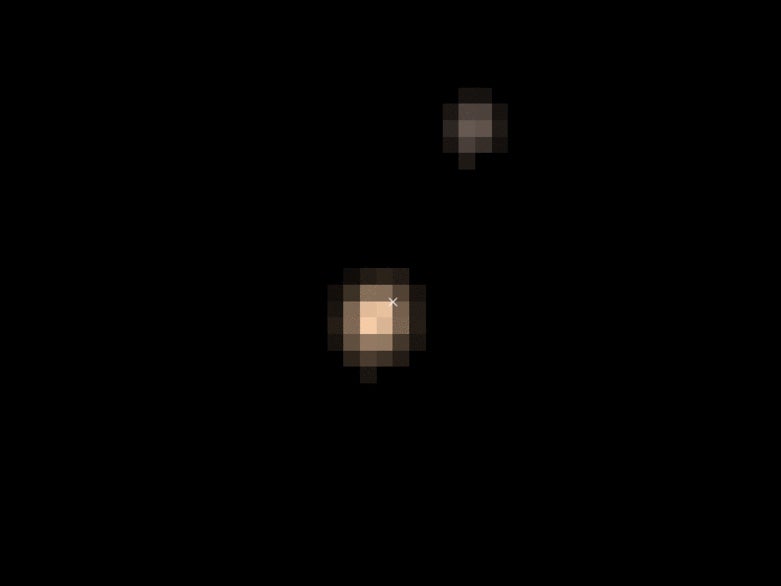 This may look like something out of an 8-bit videogame, but NASA used images gathered between May 29 and June 3 to create the first color animations of Pluto and Charon dancing around each other in their weird orbits. 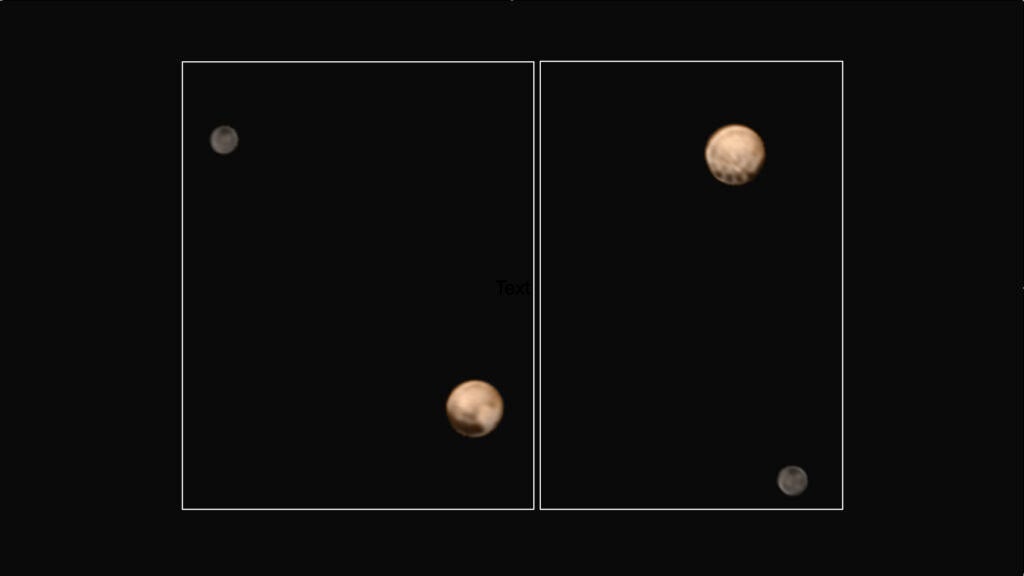 NASA is fascinated by the series of dots found on Pluto’s surface, seen in new images taken by the New Horizon’s spacecraft, released on July 1. “It’s a real puzzle—we don’t know what the spots are, and we can’t wait to find out,” said New Horizons principal investigator Alan Stern of the Southwest Research Institute, Boulder. Each spot is approximately 300 miles in diameter. 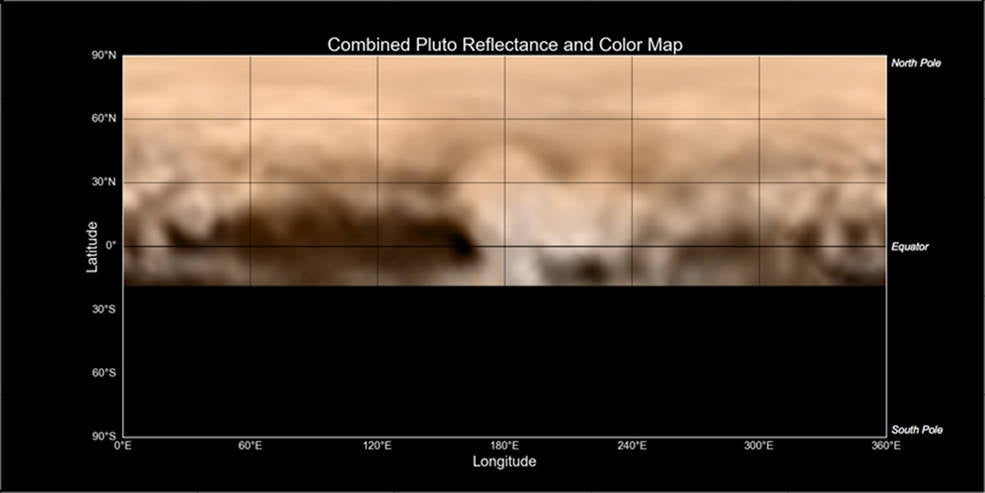 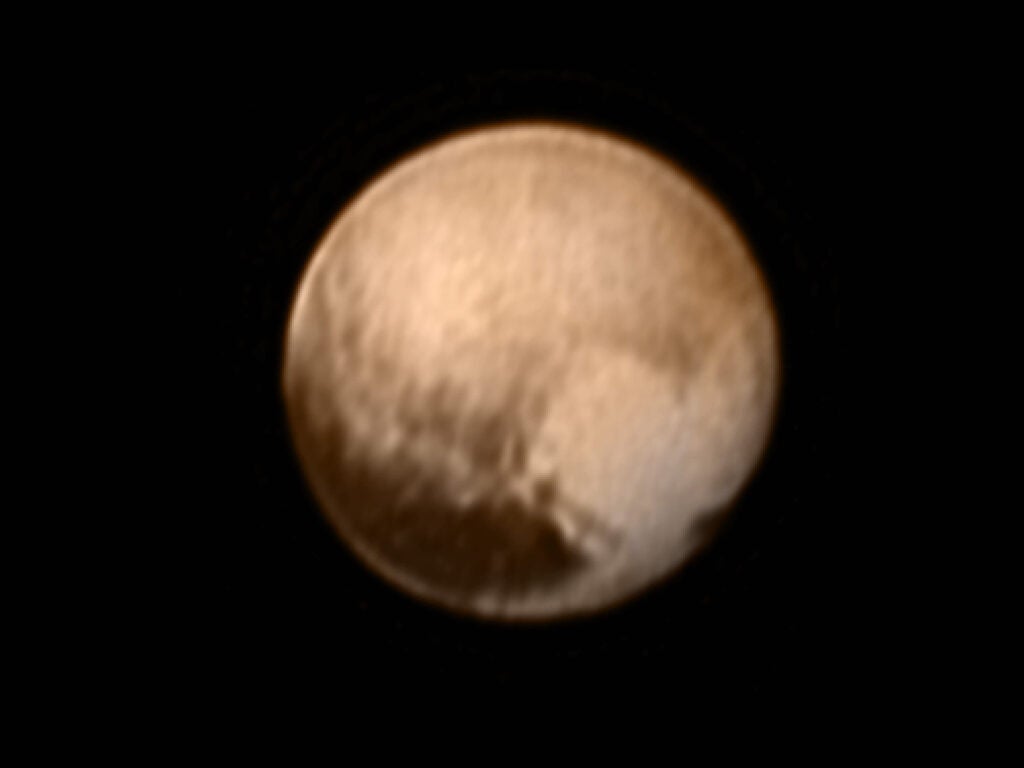 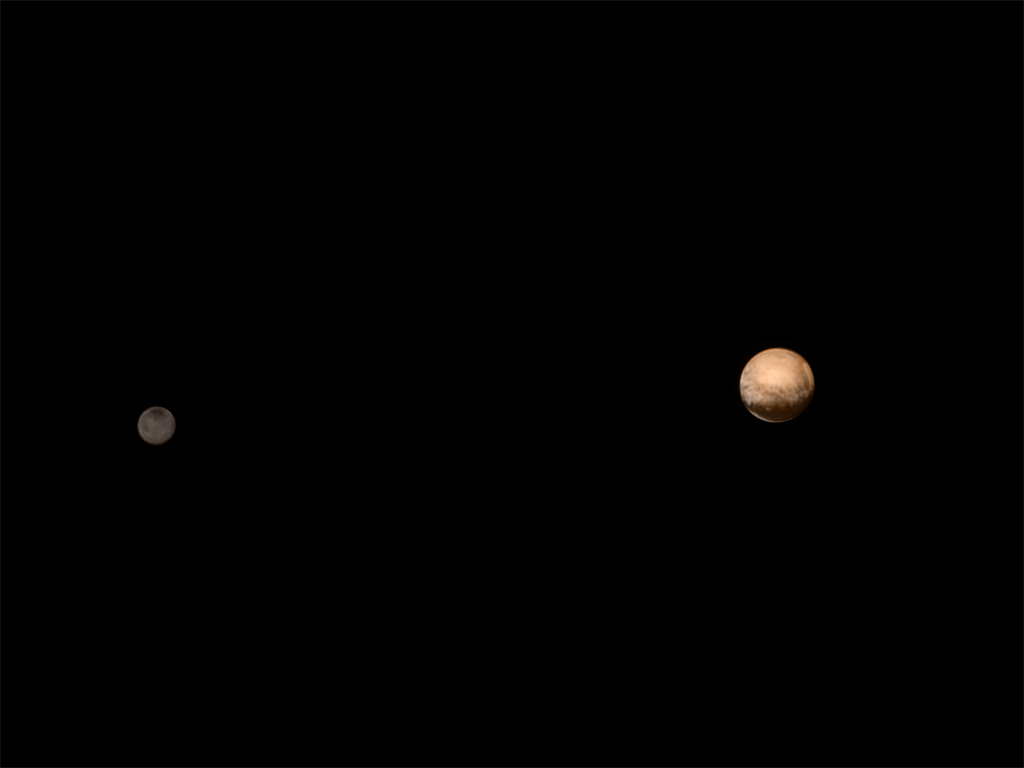 Pluto and its largest moon, Charon, differ greatly in their size, color, and composition, as shown in this image from 3.7 miles away on July 8. 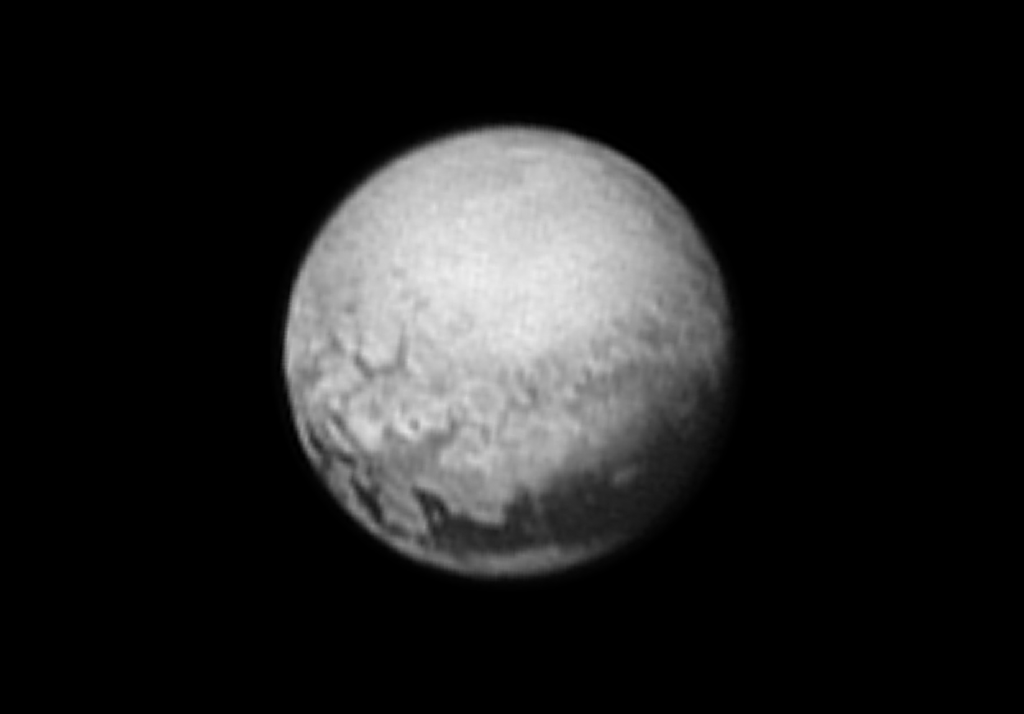 As New Horizons pulled up to within 3.3 million miles of Pluto on July 9, the dwarf planet’s surface features became clearer. “We’re close enough now that we’re just starting to see Pluto’s geology,” said New Horizons program scientist Curt Niebur in a statement. “It’s a unique transition region with a lot of dynamic processes interacting.” Of particular interest are the strange polygonal shape in the middle left-hand side, and the diagonal swipe of texture cutting from the lower left to middle right. The team hopes to learn more about these features as New Horizons moves in closer. 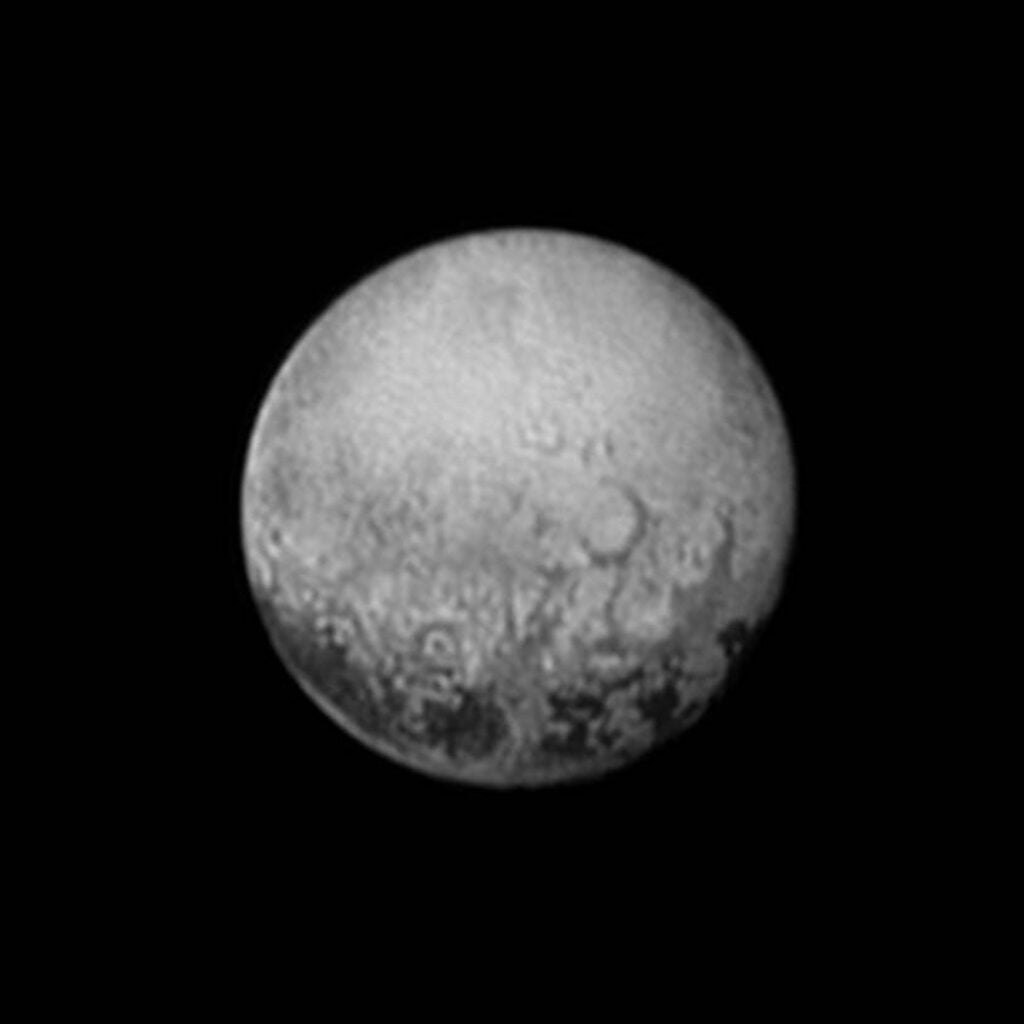 On the side of Pluto that faces its largest moon, four large spots have scientists stumped. The spots’ similar size and even spacing are mysterious, and scientists can’t tell whether they represent plateaus or just variations in the brightness of the surface. Unfortunately, as New Horizons approaches Pluto, the spots will be on the far side of the planet, so we won’t be able to get a closer look. In a statement, New Horizons principal investigator Alan Stern describes this image as “the last, best look that anyone will have of Pluto’s far side for decades to come.” Date: July 11, 2015 Distance: 2.5 million miles 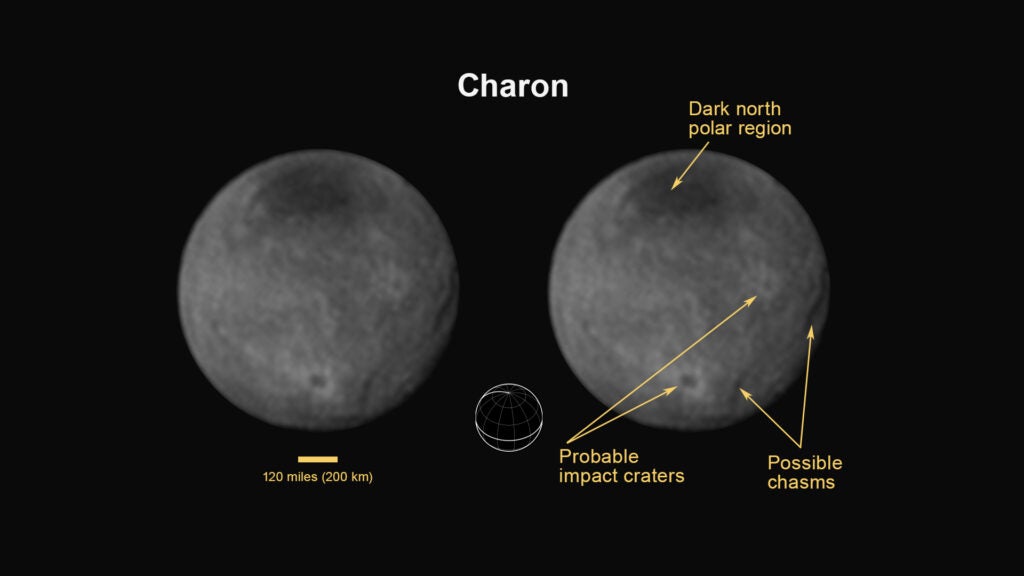 A July 11 image reveals heretofore hidden features on Charon’s surface. Pluto’s largest moon appears to be home to a chasm longer and deeper than the Grand Canyon, a dark region near the north pole that stretches across 200 miles, and a 60-mile wide impact crater. “This is the first clear evidence of faulting and surface disruption on Charon,” said New Horizons’ Bill McKinnon in a statement. “New Horizons has transformed our view of this distant moon from a nearly featureless ball of ice to a world displaying all kinds of geologic activity.” 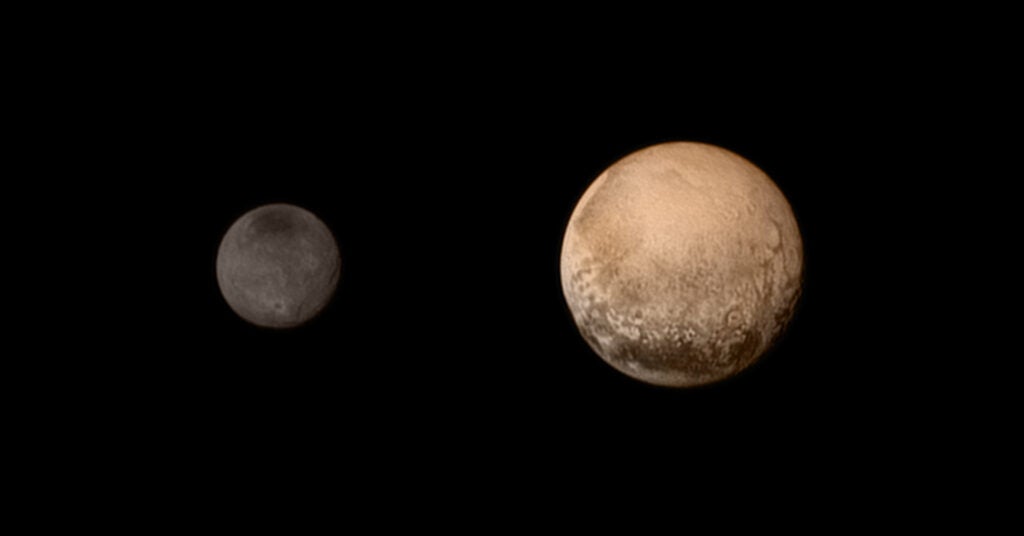 New Horizons shot this portrait of Pluto and Charon on July 11, just a few days ahead of its closest approach. For some reason, it kind of reminds us of the American Gothic painting of the farmer and his wife.
Charon
dwarf planets
icy worlds
New Horizons
planets