What To Expect From The Big East Coast Winter Storm 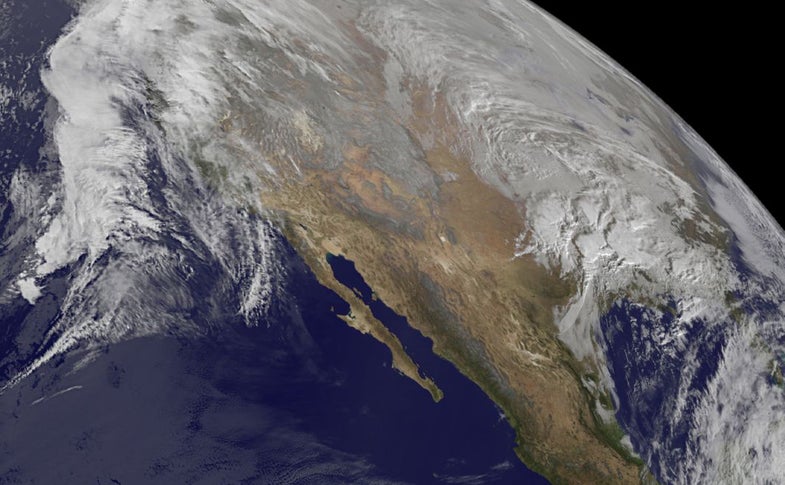 People from the Mississippi Valley to New York are bracing for a possible blizzard this weekend, stocking up on food and supplies as forecasters scramble to predict our weather future. Right now, all the signs are pointing one way: towards a huge storm. Airlines are already starting to cancel flights out of cities in the path of the weather system, with some flights out of Philadelphia, Charlotte, and New York Area airports affected.

“We’re predicting that more than 50 million people will be affected by the snow event alone “ Louis Uccellini, director, NOAA’s National Weather Service said in a press teleconference on Thursday.

At least 43 weather stations in the middle and eastern parts of the country are launching extra weather balloons, gathering as much data as they can to make the forecasts as accurate as possible. Data collected by the balloons is fed into computer models that help the forecasters predict weather conditions.

Forecasters will be fine tuning their models through tomorrow, but here’s what we’re expecting.

Get those shovels ready: Baltimore and Washington DC are currently expected to get around 2 feet of snow, a huge amount for the area. Further north, the line between sleet and snow remains hazy, and forecasters aren’t sure which areas are going to get totally slammed yet, and which might be spared the brunt of the storm, but Washington DC, Baltimore, and Philadelphia are So far, it looks like New England should be relatively unscathed.

A huge snowstorm is one thing, but it won’t be a blizzard without wind. As we explained last year a blizzard happens when the wind is blowing steadily or in gusts at speeds over 35 mph AND that same wind is blowing around a lot of snow AND those conditions last for over 3 hours. Right now, this storm is expected to bring in a lot of wind. Washington DC is already facing a blizzard warning in effect from 3 PM Friday to 6 AM Sunday. A less-severe but still very important blizzard watch will be in effect in New York City, Long Island, and parts of New Jersey, from Saturday morning until Sunday.

It isn’t expected to flood the subways of New York the way Sandy did, but there are a plethora of problems when it comes to the intersection of coastal flooding and this particular storm. Some models show it moving slowly, which would mean plenty of time for the storm to wreak havoc on the coasts, with a large storm surge potentially expected for parts of New Jersey and Delaware. As an added bonus, any storm surge could potentially be buoyed by the almost full moon which could push the combination of a high tide and storm surge even higher.

While the Northeast corridor is getting a lot of the attention, areas further south are facing down their own issues, namely ice. Instead of falling in gentle white flakes, the precipitation from Kentucky into the Carolinas is expected to be freezing rain or sleet, coating everything from roads to tree branches to power lines in a thick coat of ice. Uccellini estimates that 7 million people could be affected by ice from the storm.