Why do we still have fax machines? 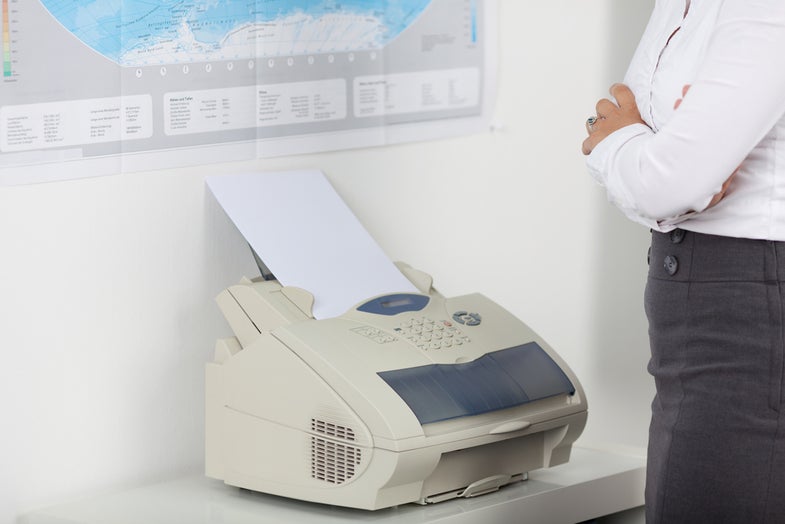 If I asked you to send me a fax today, you’d probably message back in disbelief—a what the hell message transmitted near-instantaneously via text, email, Instagram story, disappearing Snapchat, or Skype call. A fax? 1989 called, they want their communication method back.

But the fax machine isn’t dead yet. Usage certainly has fallen from its peak in fax-friendly 1997, when 3.6 million machines were sold in the United States. But technology historian Jonathan Coopersmith says it’s still too soon to count the fax machine out entirely. In fact, a fax is probably being sent somewhere, for some reason, right now.

Coopersmith is the author of the book Faxed: The Rise and Fall of the Fax Machine and technology historian at Texas A&M University. On a Monday morning in fax-phobic 2018, he called PopSci from a busy airport (“Isn’t modern technology wonderful that we’re able to do these things?” he said as he ordered tea in one state, and I listened in another) to discuss his favorite machine. He says the facsimile machine, as it was originally known, has metal roots stretching back to the 1840s. And, he believes due to its continued use among doctors, lawyers, and governments, who need valid signatures and safe information transfer, it will persist, in one form or another, for years to come.

The story starts with Alexander Bain, a mid-19th century Scottish inventor who developed an experimental machine that could transmit a scanned message line by line. For more than 130 years, various inventors, including Thomas Edison, tinkered with their own facsimile machine designs. “There’s a lot of failure, which is normal with technologies,” Coopersmith says of that first century of research and development. “There [were] a lot of people who say, ‘We can do this better. We’ll try again.'”

By the early 1900s, you could get a high-quality fax—on par with the kind of fax you’d receive today—but it cost a lot of money. “In many cases, you’re talking one or two orders of magnitude,” Coopersmith said of the cost. “For most businesses, that’s hard to justify.” For others, though, it made good sense. The Associated Press, for example, launched its Wirephoto network in 1935, which transmitted images through some 10,000 miles of leased telephone wires.

Then as now, the fax machine was based on a simple light/dark binary. To transmit a document, the machine scans a page, line by line, and transmits one set of electric pulses for the black parts (like text) and another for the white parts (like the spaces between letters, words, and paragraphs). The electric pulses are move through a telephone wire. On the other end of the transmission, a the receiving fax machine spits out black ink as directed, leaving the rest blank. It takes a few minutes, but early developers were convinced the hybrid analog-digital device showed promise.

Their bet finally paid off in the 1980s. “When that price went down, more people began to use [fax],” Coopersmith says. The machines quickly became ubiquitous in the workplace. It was an exciting time. Or at least it appeared to be in the films of that era, many of which prominently feature a fax machine. (In 1989, Back to the Future 2 laid out a vision for the future in which everyone had a fax machine in every room of their house, for example.) But it also presented a new problem, according to Coopersmith. “One of the issues raised by the legal community [was], is a fax signature legally valid?” It was this question—and its ultimate resolution—that would determine the fate of the fax, at least for now.

Before newfangled digital technologies emerged, people had to sign important legal documents by hand. You typically went, in person, to sign the papers, or you mailed them back and forth between relevant parties until every i was dotted and t crossed. But the fax machine and other technologies meant that was no longer necessary.

For a time, lawyers and others were concerned about the validity of these signatures. Would they hold up in court? What if the person who signed later claimed it was a forgery? But courts routinely upheld fax signatures, treating them with the same weight as other legal autographs. Today, many companies, including Popular Science‘s parent company, require valid e-signatures, like a faxed copy of a hand-signed document, or an e-signature from a cloud-based program like Adobe Sign that verifies signatures according to the rules laid out in the ESIGN Act, passed by Congress in 2000.

The legal community isn’t the only one to still rely on the fax machine. Healthcare is a major source of fax traffic, according to an analysis by eFax Corporate. Attitudes are changing as a new generation of tech-savvy physicians take over the reigns of our nation’s healthcare system, but many doctors and the hospitals they work for still consider fax machines more secure than email for transmitting information protected by the Health Insurance Portability and Accountability Act, commonly called HIPAA. The manufacturing industry, where telephone cables may be more reliable than internet, and the federal government, which works to process sensitive information for public release as part of the Freedom of Information Act, are also regular users of fax technology. “Doctors, pharmacies, [and] lawyers say, ‘Let’s have that fax signature,'” Cooper smith says. “It’s a certified system.”

A need for a fax machine can crop up in unexpected ways, too. In the aftermath of the Sony hack, where Hollywood elite’s emails were stolen and published online, many people reportedly started using their crusty old fax machines out of fear. Fax, Coopersmith warns, can be hacked like any other technology, but it’s still hard to imagine someone wielding a fax interceptor in 2018.

In some places, fax hasn’t gone out of style at all. “Faxing, especially, is a network technology… the more people who use it, the more valuable it becomes,” Coopersmith says. In Japan, where it seems the majority of people still rely on faxing for all manner of communication, it’s very valuable. While it’s partly a matter of habit, the fax machine offers some pretty appealing services, like a way to communicate even when the internet’s down. And faxes aren’t just confined to the office, either. They’re in the home, in the form of a 2-in-1 machine, with both fax and a landline phone.

Like big hair and blue eyeshadow, the fax machine will probably never again peak like it did in the glory days of the 1980s. The technology is slowly fading as e-signatures become the norm and electronic faxes (where physical papers are scanned and emailed as PDFs) become easier for a new generation of office workers to use.

But, Coopersmith says, this struggle is par for the course for this particular technology. The fax machine’s rise to prominence, he says, was excruciatingly long. “You have the first commercial service in 1863 in France, but it becomes half a century to become profitable, and then it takes another half century to become this worldwide phenomenon,” he says. Similarly, the decline of the fax has been underway for decades, but the true death of the machine will probably take much longer.