What is the ‘red glare’ in the Star Spangled Banner?

A history of rocket technology. 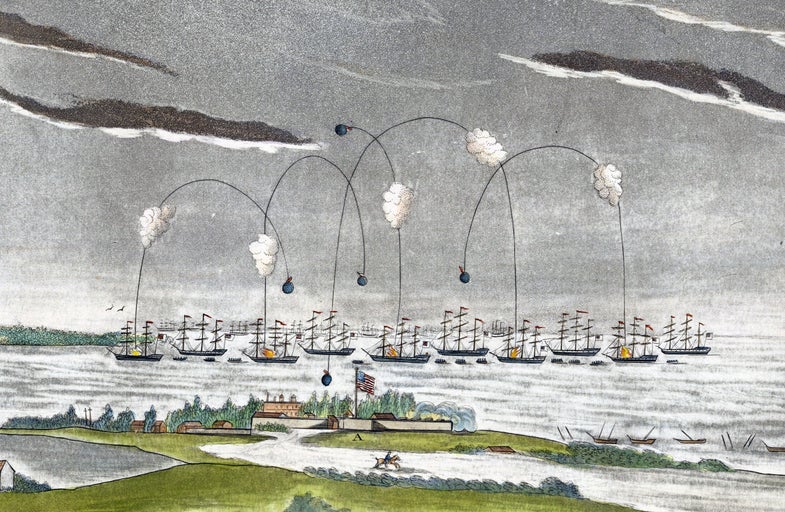 The national anthem was written during the War of 1812, not the Revolutionary War. One of the soldiers who was in Fort McHenry during the 25-hour bombardment wrote, “we were like pigeons tied by the legs to be shot at.”. J. Bower/National Park Service
SHARE

This post has been updated. It was originally published on September 4, 2017.

In moments of deep thought, have you ever wondered what the rockets in “rockets’ red glare and bombs bursting in air” in the national anthem actually are?

Of course, bombs were bombs—cannon balls. But what were rockets in 1814, when The Star Spangled Banner was written? As legend has it, Francis Scott Key bore witness to the British siege on Fort McHenry during the War of 1812. The mighty British Empire launched 600 to 700 rockets—all of them falling resoundingly short. For at the time, rockets were more or less iron-cased fireworks. Unreliable and little changed from their origins hundreds of years earlier. That’s to say, the British were not the first to use rockets. For in the grand tradition of the British Empire, they ripped the design from India. But let us go back even further to discover their origins.

The first gunpowder-powered rockets were developed in the 13th century, by China’s Song Dynasty. These “fire-arrows” were bamboo tubes capped at one end, packed with gunpowder, and attached to long sticks for guidance. The thing is, while these rockets probably looked scary to invading Mongol hoardes, their effectiveness as weapons of destruction is not well documented.

Things changed in the late 1700s, when the Mysore Kingdom of southern India went to war with the British East India Company. Mysoreans packed iron tubes with combustibles, creating more thrust than the lightweight bamboo fire arrows of yore. These new rockets could travel up to one thousand yards. More importantly, Mysoreans realized rocket warfare was most effective when launches happened en masse. In one battle, some 2,000 rockets rained down simultaneously. And no doubt soiling some British trousers. But, the British won. And confiscated the Mysorean rockets.

[Related: How to photograph fireworks]

Meanwhile in England, inventor William Congreve was struggling to make rockets fly even 600 yards. Never doubt imperialist ingenuity, though. A modified version of the Mysorean rocket was soon dubbed: the Congreve rocket. The Brits added different weighting and materials, doubling or even tripling its range.

So, that’s the rocket of the national anthem. It was also the foundation of modern rocketry, which ultimately did stuff like get us to the moon and launch fancy telescopes.