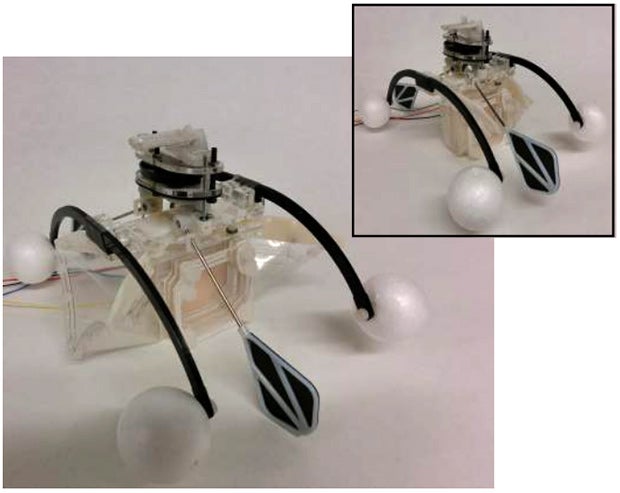 Inside these tiny machines is a colony of hungry bacteria, yearning to eat. The row-bot, as this charming little device is named, paddles about on the surface of water, funneling waste and pollution into its bacteria-rich stomach and receiving electrical power in return. It’s a self-sufficient cleaner on a tiny scale, made to bob in the sea and eat tiny bites of waste until there’s nothing left.

Presented last month at the IEEE/RSJ International Conference on Intelligent Robots and Systems in Hamburg, Germany, the paper “Row-bot: An Energetically Autonomous Artificial Water Boatman” by a team of academic researchers in Bristol, details the design and development of the tiny garbage-eating machines. The initial goal was to create a machine that could forage, like a wild animal, so it wasn’t dependent on humans to constantly recharge and reenergize itself. Inspired also by the water boatman insect, the robot they created is a tiny, hungry, buoyant surface skimmer.

For flotation, the machine has four little stabilizers. To move, there are two paddles in the middle of its body, which have flexible flipper joints to make sure they move efficiently and minimize drag. Powering the row-bot is a bacteria-filled fuel cell. In the cell, bacteria digest organic waste, and produce carbon dioxide as a by-product, as well as the protons and electrons needed to get the electrical circuit in the cell flowing. In this design, the row-bot generated more energy than it needed to keep refueling itself. That’s huge, and it means in the future, the answer to waste in the water might be sprinkling robots into the stream, and waiting until they eat all the garbage.