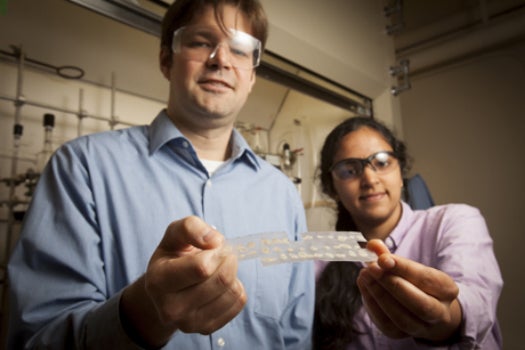 When it comes to ferreting out explosives in public places, bomb-sniffing dogs still rule, though scientists are trying to find a way to reproduce their expertise with tech. Now, Cornell University’s William Dichtel and graduate student Deepti Gopalakrishnan have created a polymer that could one day replace the canine bomb squad, as they describe in a recent paper in the Journal of the American Chemical Society.

The fluorescent polymer responds to the presence of RDX, a powerful explosive whose low vapor pressure typically makes it crazy difficult to detect without direct contact.

Under normal circumstances, the polymer acts kind of like a glow stick, absorbing light and turning it into energy, then releasing it as light again. If, as that energy flows through the structure of the polymer, it happens upon a molecule of RDX, though, it is converted into heat instead of light. The polymer ceases to glow, signaling that an improvised explosive device is nearby.

This method can detect trace amounts of explosives and alert authorities to people who have handled them recently. In the future, it could be used in small, handheld detectors in the style of Fido, a fluorescent detector for TNT.

“One of the goals is to make detectors that can detect not just explosives on someone’s hands, but in the cloud around them,” Dichtel said in a statement. “If someone had an IED in their bag, it would be nice to not have to open it.” Nice indeed.