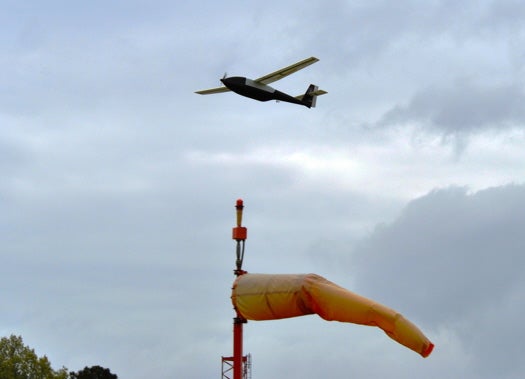 In drone design, there’s a trade-off between flying quietly and staying airborne for a long time. The Ion Tiger drone, which just completed a continuous 48 hour 1 minute flight, might be the breakthrough that changes this.

The reason for the trade-off comes down to fuel. Hydrocarbons (gasoline and the like) store an incredible amount of power in a small volume, which allows a drone like the MQ-9 Reaper to fly for 30 hours. Drone engines release this through combustion, a very noisy process. Quiet-running electric engines, on the other hand, are constrained by battery power, which typically limits flight time to only a few hours.

This barrier have led to a divergence of design: Big gas-guzzling drones can fly high up for long periods of time (for example, to observe an entire village), while small electric drones, though quiet enough to spy within a city unnoticed, only have sufficient energy for short missions.

The Ion Tiger does all of this while remaining nearly silent, which means it can spy without being heard from as low as 1,000 feet. Spooky!

Another upshot to using hydrogen fuel cells for drones? Rather than needing to ship gasoline in bulk, soldiers can generate new fuel from just water, a solar power generator, and a few other pieces of equipment necessary to compress hydrogen. With such a set-up, which could be quiet small, troops could operate a drone like this indefinitely.