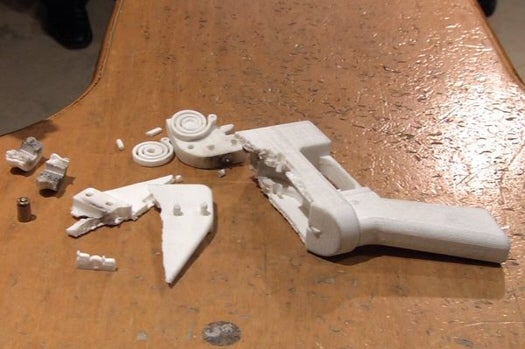 Following schematics provided by an anonymous Wisconsin engineer, the police department spent $35 and 27 hours to print the “Lulz Liberator” on a $1,650 desktop 3-D printer. During testing, the plastic firearm suffered a “catastrophic misfire” (see image below) that could have seriously injured a person using the pistol, according to New South Wales Police Commissioner Andrew Scipione.

The Australian police used a cheaper printer and weaker plastic to create their 3-D printed gun, compared with the supplies used by Defense Distributed. “We think it’s only a matter of time before we see one of these weapons used in a serious crime in New South Wales,” Scipione said.

Without an appropriate license, it is illegal to make, possess, or use a 3-D printed gun in Australia. The police commissioner said the government will need to consider regulation of the CAD files used to create 3-D printed weapons.