Soldiers have a futuristic new way to find snipers. 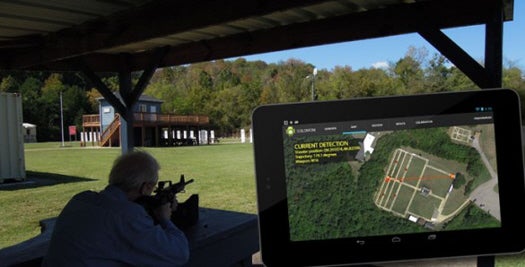 A new DARPA-funded smartphone app analyzes the sounds and shockwaves from bullets to determine the source of gunfire. Researchers at Vanderbilt University created the app for law enforcement professionals, not civilians—so stay away from gunfights, and don’t try to film them with your cell phone.

How it works: Sensitive microphones inside a palm-sized external sensor box pick up the sound and atmospheric wake from a bullet. Then the sensor box, which includes a precise clock, wirelessly relays the data to a smartphone. It takes six of these external units to obtain accurate location information (which is no problem for a squad of troops or a police team.) Another version of the app, created by the same researchers, uses two larger sensor boxes and only picks up on the shockwave. It is less precise, but still far more accurate than human hearing. The technology was originally developed for soldiers’ helmets.

Both versions use smartphones to assemble and display the information, and are great examples of composite technology. Nothing is particularly new here; microphones, clocks, and smartphones are all well-developed technology. But this app combines those old technologies with the magic sauce of smart software to create the kind of tool that soldiers under sniper fire could only dream of in decades past.

While the app was originally designed to help U.S. soldiers locate snipers, the principles are the same for all gunshots, and the technology could be vital a tool for any active shooter situation, whether military or law enforcement.