We've got a few contenders now. Who's going to print a house first? 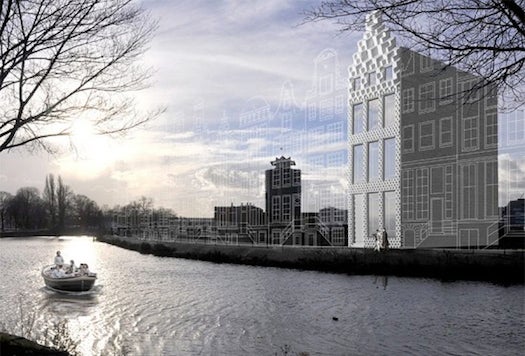 We’ve already covered two plans for a 3-D printed house, and they couldn’t be more different. The first is a Mobius-strip-style building without a beginning or an ending. The second design would be made of plastic, and it looks kinda like a spider’s nest. This design, the latest contender, was created by Dutch firm DUS Public Architecture, and actually looks like a relatively normal building–a cathedral, even.

Using the massive, custom-built KamerMaker printer, DUS wants to start printing the first room on-site (yes, the printer can make entire rooms) in the next six months, then print the rest of the building in pieces over the next three years. After the house is done, the firm wants to split up the interior room-by-room to create different areas for various research projects.

Any 3-D printed house is a super ambitious project, but this one might succeed before the others because it looks the least ambitious but the most thought-out. The renderings make the proposed house look how you’d expect a house to look, 3-D printed or not, and the firm’s got an itemized breakdown by date of their plans for the building. And, of course, with the KamerMaker, they’ve got the hardware to make it happen.