Individual "droplets" can join together and become something larger than themselves. 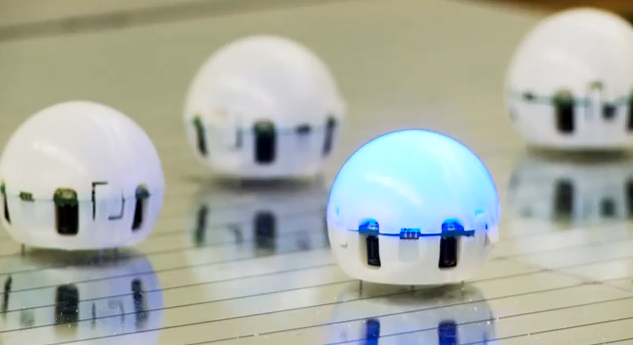 Some of the best robot swarms we’ve seen can either fly in formation or swim in a group, and while these are certainly awesome, they represent somewhat singular abilities. A new swarm that looks like a bunch of ping pong balls is both simpler and more complex, with potentially much more flexibility.

Nikolaus Correll, an assistant professor at the University of Colorado, has a team of engineers building basic robotic building blocks that can be taught to work together. After they learn their skills, the individual robots can be modified or used for a variety of purposes. The goal is to develop a robot skill set that can be reproduced–from self-assembly and pattern recognition to shape-changing.

“Our robots aren’t really designed for one particular problem,” said Nicholas Farrow, a research assistant in computer science who is working on the project. “When our robots are completed, we’ll be able to apply them to problems we haven’t even thought of right now.”

The team is led by postdoctoral researcher Dustin Reishus, who works in Correll’s lab. The team built 20 robots, each the size of a ping pong ball, which they call “droplets.” When the droplets swarm, they create a smart “liquid,” as Correll explains it. About 10 of them are actually functional, but the team is still writing code to make the droplets capable of swarming together.

They could be modified to swim and clean up oil spills, potentially. Or they could be sent into space to assemble space station or satellite parts–or even self-assemble, Terminator-style, into whatever structure is required.