Recent events have shown how social networks can help world unrest get witnessed globally. YouTube was a major player in... 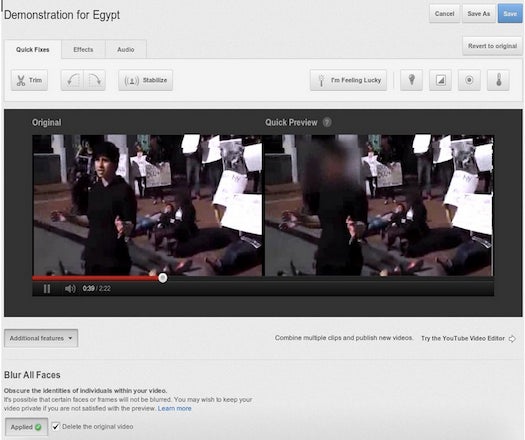 Recent events have shown how social networks can help world unrest get witnessed globally. YouTube was a major player in sending videos of Arab Spring protestors out to masses across the world, but it had its drawbacks: the person protesting in a video was seen everywhere, but they were also seen back at home, where losing anonymity to a despotic government could become dangerous. To counteract that, YouTube is launching a tool to let video uploaders blur faces, hopefully allowing the spread of the videos without bringing danger to the ones in them.

A “blur all faces” option in YouTube’s video enhancement tool lets a user edit their video, creating a new copy with obscured faces. After that, you can preview what the video will look like, then delete the blurless original. (There’s still some bugs to be worked out in facial recognition, but the feature goes live today.)

It’s not only for protests, of course; anyone who wants to stay anonymous, or keep someone else anonymous, is open to use it. There’s no telling exactly who will use it, or what for, but the tool could mean life or death for protestors, or the difference between being heard around the world and not.