The synchronized left-right-left-right neck swivel that’s the hallmark of tennis spectation can be tough on the cameraman, too. Even in... 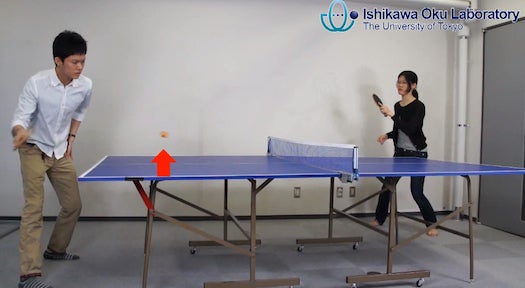 The synchronized left-right-left-right neck swivel that’s the hallmark of tennis spectation can be tough on the cameraman, too. Even in professional hands, capturing the perfect sequence is difficult when done manually. But a new project is aiming to autonomize a camera to perfectly capture close-up, dead-center video of fast-moving objects. And, at least when chasing a ping-pong ball, it looks good.

Rather than moving an entire camera, the system from researchers at the Ishikawa Oku Laboratory at the University of Tokyo sets up two mirrors in a camera’s line of vision. The mirrors automatically tilt to keep a ball or other object in sight, and the camera records it all at 1,000 frames per second. That’s enough to see a ping-pong ball rotating as it flies, like a twee version of The Matrix‘s bullet-time.

In addition to making referees better informed, researchers are hoping the tech could be used to record more detailed video of birds, aircraft, cars, and more.