Video: DARPA’s FastRunner is a Robo-Ostrich Capable of 30 MPH Sprints

And it's only getting faster 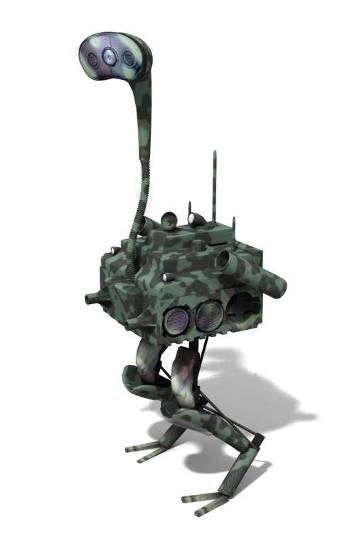 When in doubt, look to nature. It’s the creed of the biomimicry movement, and it’s not lost on blue-sky thinkers over at DARPA. Research carried out by MIT and the Florida Institute of Human and Machine Cognition (IHMC) is delivering to the DoD a robotic biped that will run faster than Usain Bolt–perhaps as fast as 50 miles an hour eventually. Presenting DARPA’s robo-ostrich.

The rendering above shows FastRunner, the robot capable of extreme speed and endurance even over uneven terrain or negotiating obstacles or stairs. The collaboration has already produced a bird-like leg design based on the ostrich that consists of a single motor per leg, a locking knee, and springs that can store and release energy so it doesn’t have to rely on the batteries for every bit of kinetic motion. The single motor per leg and springs also help cut down on weight, keeping FastRunner lithe and lean for those long sprints ahead.

The current test leg is capable of hitting 27 miles per hour (matching Bolt’s best) but the MIT/IHMC team things it could reach 40 or 50 miles per hour before all is said and done. Moreover, the leg doesn’t require extra energy to carry weight, so the payload capacity is basically whatever the actual material strength of the leg can handle.

The architecture is also scalable, the team says. The FastRunner leg could be adapted to four-legged ‘bots or humanoids as well to grant them higher running speeds and increased agility.

If the ostrich-bot conjures thoughts of Boston Dynamics’ BigDogand LittleDog, as well as the cheetah robot under development over there, it should. Both DARPA and IHMC have worked with Boston Dynamics on aspects of those projects in the past. The DoD seems to be working toward some confluence of biomimicked robotics technologies that could someday provide a suite of sophisticated legged robot designs that will help in building assistive robot platforms, exoskeletons, and the like.

To get a better idea of how exactly the robo-ostrich leg articulates, check out the videos below.