Video: NASA Is Working On a Tractor Beam That Can Reel in Particles with Light

NASA may be temporarily out of the manned spaceflight game, but that doesn’t mean it isn’t preparing to realize all... 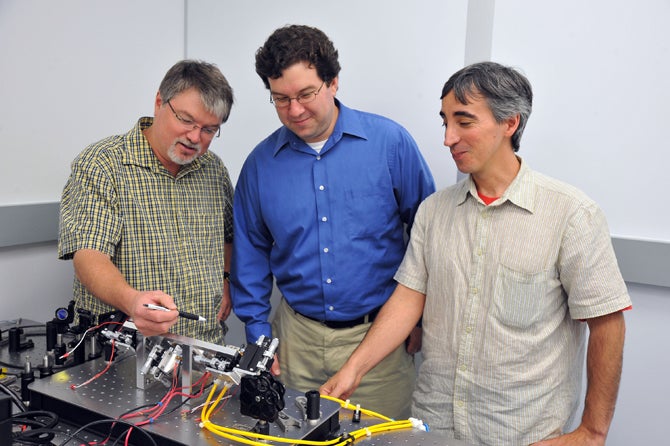 NASA may be temporarily out of the manned spaceflight game, but that doesn’t mean it isn’t preparing to realize all of our most technologically compelling sci-fi fantasies. The agency’s Office of the Chief Technologist (OCT) has awarded three researchers funding to study three different means of creating a tractor beam–a ray of laser light than can trap and pull objects in the opposite direction of the beam.

But we won’t be trapping and pulling in rebel freighters right away. These explorations into tractor beam tech are designed to produce a way for orbiting science spacecraft and planetary rovers to corral and collect small atmospheric particles at a distance. Such a tool would allow both orbiters and rovers to sample different layers of a planet’s atmosphere, for instance, or allow a probe to sample the tail of a comet without placing itself in its debris-strewn wake.

So how do you build a tractor beam? The three NASA scientists are looking at three different methods. The first–the “optical tweezers” method–relies on two counter-propagating beams that create a kind of ring-like geometry that confines particles inside. In lab tests, researchers have shown that by alternately strengthening or weakening one of the beams they can create a backward pull along the ring’s center where the particles are trapped, moving the particles opposite the direction of the beams. This method, however, requires an atmosphere because it relies on temperature differences to move the particles. It won’t work in the vacuum of space or on moons or asteroids with no atmospheres to speak of.

The second technique uses optical solenoid beams that spiral around the axis of propagation–just picture a spiral laser beam that can pull particles in the opposite direction of propagation. It does this via electromagnetic effects caused by the laser, and thus requires no atmosphere.

Then there’s the third method, which is completely theoretical. Called a Bessel beam, it basically would look like a single beam of light surrounded by concentric circles of light if you shined it against the wall. Somehow this arrangement of light induces strange electric and magnetic fields that can pull an object back in the opposite direction of the beam itself. Emphasis on the “somehow,” as we don’t really get it either.

Which is why NASA has some top brains in the field of lasers on the problem. The team will explore all three methods and settle upon the one with the most robust technological and scientific applications. See a couple of examples of tractor beams in action in the videos below.