News Corp’s ‘The Daily’ Has Its Own News-Gathering Aerial Drone, Which Is Drawing FAA Inquiries

Not that we're jealous or anything 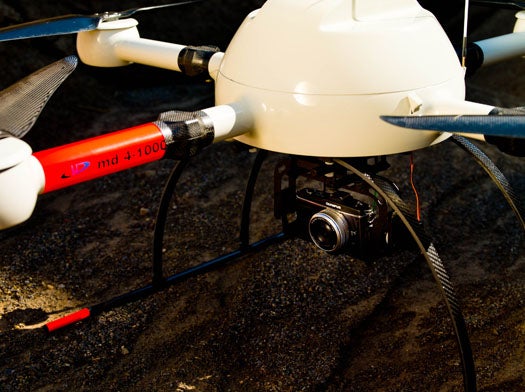 The U.S. military has drones, lots of them if the daily reports coming in from Afghanistan and Pakistan are any indication. And a handful of law enforcement groups–though less than would like–have a drone or two at their disposal. But on the domestic, non-security front, drones live a in a regulatory gray area. Hobbyists can use them, but commercial entities are not supposed to employ drones for any kind of monetary gain, says the FAA.

Nonetheless News Corp’s The Daily has a news gathering drone aircraft that it’s been flying around, and the FAA is investigating that use to ensure that it complies with all of the nebulous FAA regulations that kind of exist regarding private drone usage.

The Daily has used its drone to capture aerial footage of storm-struck Alabama earlier this year as well as the flooding in South Dakota, Forbes tells us. Their hardware: a MicroDrone md4-1000, a micro aerial vehicle that can be fitted with various imagery or sensor payloads (Google has one like it, purportedly to augment its aerial map data).

The question for the FAA, then, is whether or not new gathering (or aerial cartography, for that matter) is considered a commercial exercise. Seems like it would be, but given that the FAA is reportedly considering loosening its drone aircraft restrictions later this year anyhow, The Daily may just get the green light anyhow, opening up a potentially really cool new high-tech means of reporting the daily news.

That would be great news for The Daily, which happens to belong to the same media family as the News of the World which recently collapsed under shady phone hacking allegations. Of course, all of this information is unrelated, because it’s not like you can use a drone to hack a cell phone. Right?