The reason most laser systems aren’t practical for jobs outside of the lab–things like missile defense or interstellar empire building–is... 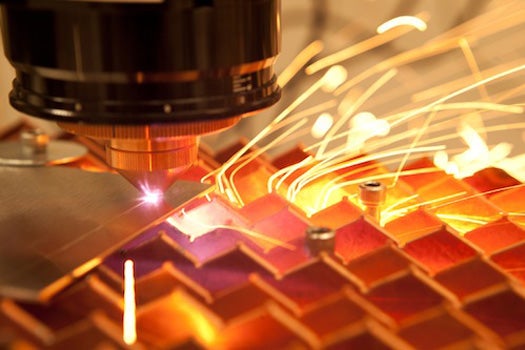 The reason most laser systems aren’t practical for jobs outside of the lab–things like missile defense or interstellar empire building–is because of their low efficiency and high maintenance. Powerful lasers are by nature big lasers requiring a lot of per unit input per unit of output, and they tend to need highly controlled conditions to function consistently and flawlessly. But a two-year-old company spun out of MIT’s Lincoln Lab says it has broken through several of the usual limitations and is commercializing a direct-diode laser system that is brighter, more powerful, and significantly more compact than its peers.

TeraDiode’s system is based on semiconductor laser technology (fueled by electricity rather than chemicals, which is already a plus from a safe-handling standpoint) augmented by an optical system that wrangles several beams of light into a single powerful beam. Powerful enough, the company says, for industrial cutting and welding. Or for blowing stuff up.

Weapons-grade lasers are a tough sell (as regular PopSci readers know from our ongoing boomand bust coverage of the Missile Defense Agency’s Airborne Laser Test Bed), but if TeraDiode’s system can pack as much punch into a small package as the company claims, it could be onto something.

The company sees its lasers someday deployed on ships or tanks, small enough to be mobile but strong enough to down a UAV or perhaps even knock incoming artillery or RPGs out of the air. More near term, it wants to get its direct-diodes on the back of fighter jets to confuse–or perhaps even destroy–incoming anti-aircraft missiles. And TeraDiode isn’t just talking a big game it seems–the company told Xconomy that testing on the aircraft defense system could begin in a year, with deployment in three to five years.