Every night in Texas, vast swarms of Mexican free-tailed bats emerge from caves to dine, swarming in dense clouds and... 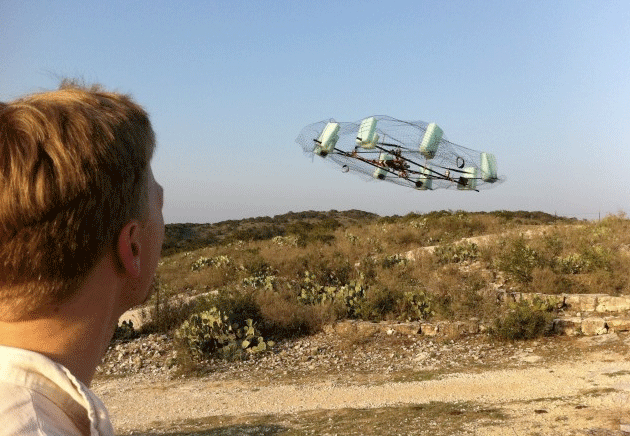 Every night in Texas, vast swarms of Mexican free-tailed bats emerge from caves to dine, swarming in dense clouds and plucking huge amounts of insects out of the air. They dip, swirl and turn on a dime to chase their prey, while somehow avoiding collisions with each other. To study how they do this, bat researchers from Boston University built a quadcopter to fly with them and purposefully get in their faces.

The “Batcopter” was a home-built quadcopter made of carbon-fiber hunting arrows, packing foam, bamboo and bird netting, among other everyday tools. It was operated with OpenPilot Copter Control, an open-source UAV platform. The copter recorded the bats’ responses using three ground-based high-speed FLIR cameras and an airborne 3D HD GoPro camera.

The first batcopter was built from towel racks purchased at Home Depot, and while it worked well in Boston, the aluminum frames proved too heavy to fly at Texas’ higher altitudes. Sebesta and his crew raided local hardware stores and an ammunition store in rural Texas to find lighter materials, settling on the arrow shafts, twine, zip ties and foam to fashion Batcopter 2.0.

The rotors were covered with bird netting to ensure they didn’t hurt any bats who ventured too close. The team also had to design a support structure so the bats couldn’t push the netting into the rotors, disabling the craft.

Sebesta explains his team’s designs in great detail over at the OpenPilot forums, and in a blog posting at BU’s Mechatronics Lab.

Batcopter 2.0 easily penetrated clouds of swarming bats, gathering data until the motors overheated in the Texas sun. The bats seemed to fan out to avoid the copter as it penetrated their swarm:

After a couple days of gathering data, one of the rotors caught on a carbon fiber strand and the copter crashed, causing too much damage for it to fly again.

Sebesta said it will take some time to review the data and determine what the researchers learned about bat flight. But they already learned plenty about UAVs — and the DIY ingenuity that advanced science sometimes requires.

(images and video used with permission) 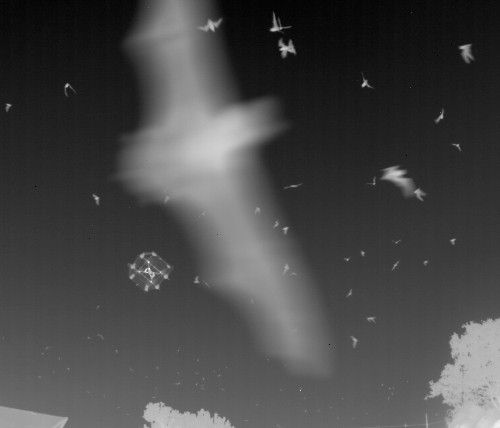 The batcopter is visible flying amid the bat swarm in this infrared photo.
Animals
batconf
bats
bats dying
Boston University