New Diamond Aerogel is the Airiest Diamond Ever Made

Diamonds are the hardest solid materials we know, and the ghostly space-age materials known as aerogels are the least dense.... 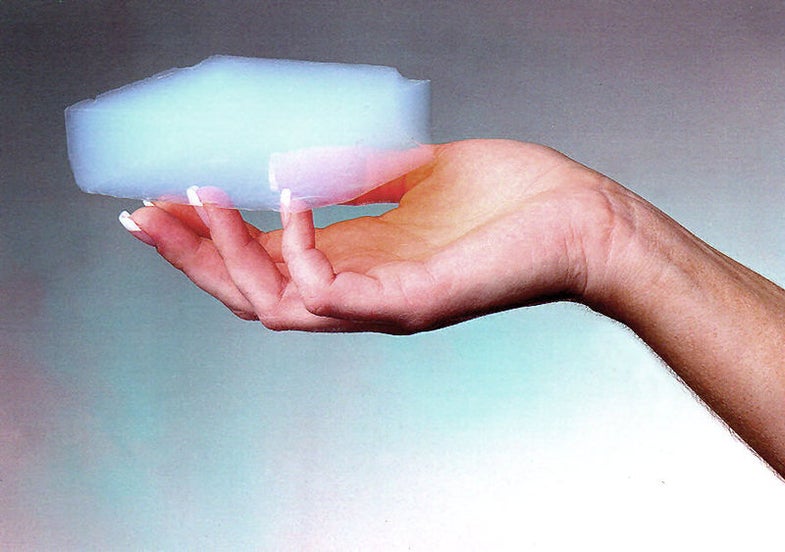 Diamonds are the hardest solid materials we know, and the ghostly space-age materials known as aerogels are the least dense. Looking for a challenge, scientists at Lawrence Livermore National Laboratory decided to combine these substances and turn out a spongy, translucent version of a girl’s best friend.

The result is a diamond aerogel, definitely the least dense diamond ever and perhaps one of the most valuable aerogels ever. Both aerogels and diamonds have interesting qualities, so a substance that combines their properties could be useful for, say, optics, quantum computing or structural engineering, among other possibilities.

Aerogels are porous, diffuse rigid materials, resembling a solid block of smoke in appearance and a chunk of Styrofoam in texture. They are used to insulate space suits, pick up cosmic particles, and even as home insulation. They’re made by constructing a conventional gel and then removing the liquid though supercritical drying. The resulting material is only slightly more dense than air — aerogels themselves are 90 percent air — but retains the structure and rigidity of the non-liquid gel components.

To make a diamond aerogel, Peter J. Pauzauskie and colleagues at Lawrence Livermore National Laboratory started with an amorphous carbon aerogel precursor and placed it in a diamond anvil cell, which is used to subject items to prodigious pressures. The team injected neon to prevent the aerogel from collapsing under the pressure, and subjected the substance to 21, 22.5 and 25.5 gigapascals — that’s about 200 to 250 times the pressure at the bottom of the Mariana Trench, in case you’re wondering. (It takes about 18 GPa to make a synthetic diamond.)

The resulting aerogel, confirmed through electron and X-ray spectromicroscopy, had a diffuse yet solid nanodiamond matrix. It’s transparent and pliable like plastic, and it even sparkles like the big ones, the researchers said. The aerogel possessed a bright and stable photoluminescence, which its precursor material did not. Diamonds emit electrons, so this particle emission could be useful for ultra-strong quantum information processors, the authors say.

The research appears in the Proceedings of the National Academy of Sciences.