NASA’s high-resolution 3-D maps of the moon’s pockmarked terrain the most precise topographic measurements to date—bring us one giant leap... 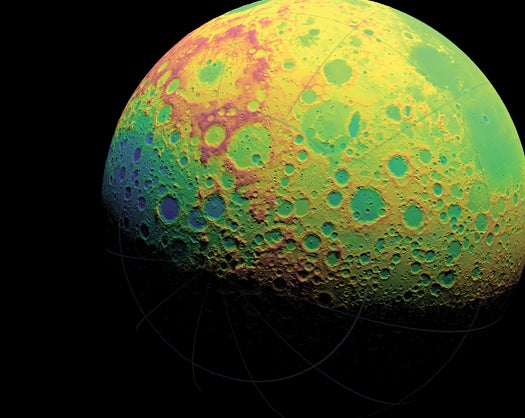 NASA’s high-resolution 3-D maps of the moon’s pockmarked terrain the most precise topographic measurements to date—bring us one giant leap closer to a return mission. To create the map, the laser altimeter LOLA on the Lunar Reconnaissance Orbiter bounced five laser beams off the surface of the moon 28 times per second and measured the duration of their return flight to gauge elevation. NASA operators calculated the distortion, or spread, of the beam to find what scientists call roughness; the more distortion there was in the beam, the bumpier the landscape.

With two more years to survey, LOLA’s maps will provide navigational capability for future manned and robotic missions to the moon’s polar surface. Not only can scientists tell exact contours, they can estimate the heights within each sampled point. “If you have rocks of three or four feet,” says planetary geodesist David Smith, the principal investigator for LOLA, “there’s no way a lander can get down there.”