With telepresence robots serving as stand-ins, there’s no reason for sick kids to miss school. Some children may prefer to... 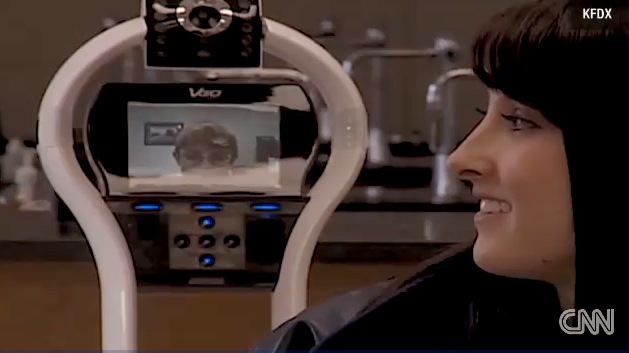 With telepresence robots serving as stand-ins, there’s no reason for sick kids to miss school. Some children may prefer to skip class, of course, but for those with serious immune system disorders, telepresence ‘bots are a lifeline to the outside world.

For the past three weeks, a new telepresence robot has allowed Knox City, Texas, high school freshman Lyndon Baty to interact with classmates, attend lectures and feel like a regular student. He suffers from polycystic kidney disease and had a kidney transplant at age 7. He attended school until last year, but when he started showing signs of transplant rejection, he was forced to stay home because of his suppressed immune system. He wears a surgical mask and must avoid almost all social interactions just to stay healthy.

In December, school district officials heard about the Vgo telepresence robot, a new platform released last year, and they got one for him. As long as he has Internet access, he can attend classes from anywhere — home, the hospital or any other safe spot. He started using it Jan. 18.

The Vgo, which cost the school about $5,000, stands about four feet tall and has wheels so Lyndon can drive it around his high school campus. A video monitor shows his face and speakers project his voice, so teachers and friends can see him as if he was there. Its battery lasts 8 hours.

“I never thought when I was sick that I would ever have any interaction, much less this kind. It is just like I am there in the classroom,” Lyndon said in an interview with a Texas TV station.

He’s not the only one benefitting from telepresence technology. A young leukemia patient in Moscow has a plastic telepresence bot in the classroom, too, which helps him participate in history, English and French lessons. Stepan Supin’s robot, also named Stepan, can broadcast his lessons to a computer in his home. A screen in front of the ‘bot allows him to participate in class, according to an AFP story.

Telepresence robots have been extolled for their ability to help in factories, office meetings and other professional settings. But these two examples, although uncommon, showcase an even better use for the technology: Helping otherwise isolated people stay connected to others.

Providing homebound people with video feeds or teleconferencing is not the same thing, especially in school settings where locker-side conversations are as important to a student’s personal growth as the day’s algebra lesson. It would be great if telepresence robots could help more students like Stepan and Lyndon live happier, more productive lives. 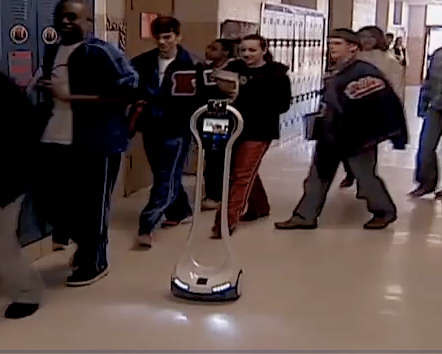 Telepresence Bot in the Hallway