Artificial Skin Gets a Solar-Powered Upgrade

Robots keep surpassing us in domains considered distinctly human (game shows come to mind). Our ability to sense things with... 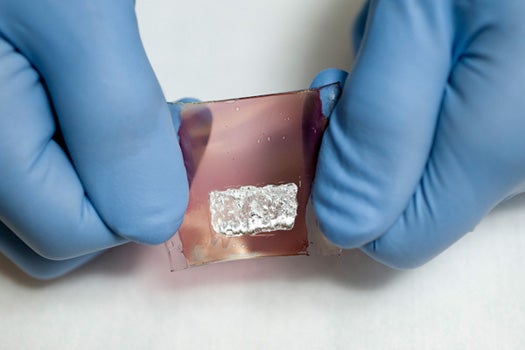 Robots keep surpassing us in domains considered distinctly human (game shows come to mind). Our ability to sense things with our skin once separated man from machine. Now artificial skin is not only flexible and touch sensitive, but solar-powered.

Stanford researcher Zhenan Bao’s solar-powered system is made up of polymer solar cells that can be stretched up to 30 percent without losing power or sustaining damage. It’s an important distinction that the skin is stretchable, not just flexible, as a flexible skin would still crack if covering body parts such as elbows that extend when they move.

The faux-skin’s base is a flexible elastic organic transistor that contains a touch-sensitive rubber layer. Pyramid shapes in the layer compress when touched, changing the current flow through the transistor. The most sensitive incarnations can feel the minute pressure of a fly’s landing.

Adding the solar cell layer allows the skin to be stretched to cover any joint. Even when distorted by the bending, it can still generate the power needed to run its sensors–the solar array is patched into a circuit with a liquid metal electrode that changes shape along with the solar cells.

The skin can also be modified to detect biological or chemical materials. Coating the transistor with a nanometer-thick layer of another molecule that will bind to the substance being sought allows the skin to register when it comes in contact with it. Bao and her team have successfully detected a certain kind of DNA through this process and are now working on using it to detect proteins, which could be useful for medical diagnosis.

The benefits of a solar-powered, stretchable skin extend beyond robotics. If it could be wired to human nerves, it could allow patients with prosthetics to gain back feeling in their missing limbs. It could also one day coat cars, or be worked into clothing such as soldiers’ uniforms, working simultaneously as a biosensor and solar power generator.