Artificial Skin Feels With Nerves Made of Clear Nanotube Springs

A new stretchy, supple synthetic skin prototype developed at Stanford has some impressive pressure sensitivity, deforming and contorting without any... 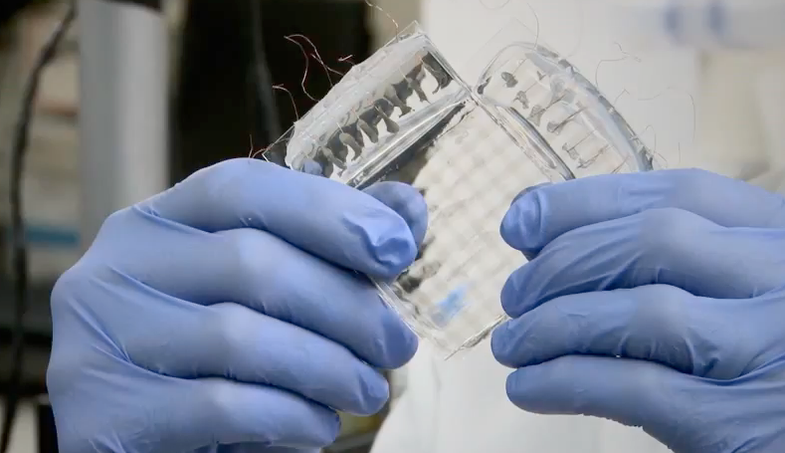 A new stretchy, supple synthetic skin prototype developed at Stanford has some impressive pressure sensitivity, deforming and contorting without any breakage or wrinkling. It’s made of spray-on carbon nanotubes, which act as springs and can measure the force being applied to them.

“This sensor can register pressure ranging from a firm pinch between your thumb and forefinger to twice the pressure exerted by an elephant standing on one foot,” according to Darren Lipomi, a postdoc at Stanford who wrote a paper describing the new sensor. And it doesn’t deform at all.

Lipomi and colleagues in Zhenan Bao’s skin lab used nanotubes suspended in liquid, spraying them onto a silicone surface and then stretching the silicone. The nanotubes arrayed themselves in alignment with the direction of the stretch, according to Stanford News. A second stretch, perpendicular to the first, makes the nanotubes stretchable in any direction. After their initial stretch, the tubes coil up like springs, and can be stretched repeatedly without losing their conductivity, Bao explains in a Stanford video.

The sensors are made from two nanotube-coated silicone pieces, sandwiching a third layer of deformable silicone that stores an electrical charge. When pressure is applied, the device’s capacitance increases, and this can be used to calculate the amount of pressure. It’s not quite as sensitive as another super-sensitive skin developed in the same lab last year, because the researchers were focused on making this one transparent.

The goal is to use sensors like this to build a sensitive yet surreptitious artificial skin, Lipomi said.

“The ultimate dream of this type of research is to restore functionality to lost skin, or amputees, or injured soldiers or burn victims,” he said. The research is published in the journal Nature Nanotechnology.