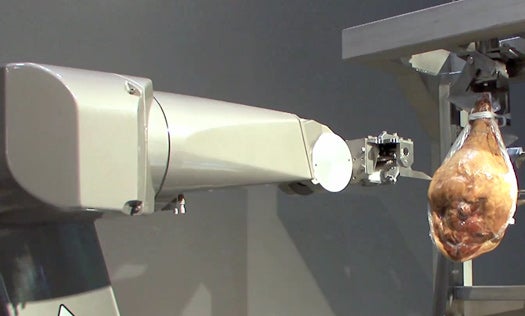 Just in time for the holidays comes a robot designed to swiftly and efficiently de-bone your ham. Wielding a fearsome knife reminiscent of the stabbing bot we saw months ago, HAMDAS-R, developed by Mayekawa Electric, removes the bones from 500 hams in one hour, twice as fast as the fastest human ham boner.

HAMDAS-R represents a leap forward in the automation of food processing – the “variations in meat form and bone size” have heretofore been an obstacle in robotic processing of “irregularly shaped, soft foods” such as hams. This robot is able to consistently distinguish meat from bone. While the advance in technology is exciting, the automation of skilled labor is also another sad step toward the day the robots leave us all unemployed. Which would still be better than HAMDAS-R turning its ham de-boning knife on humans.