Just as the AK-47 rifle shifted the balance of power on battlefields the world over during the second half of... 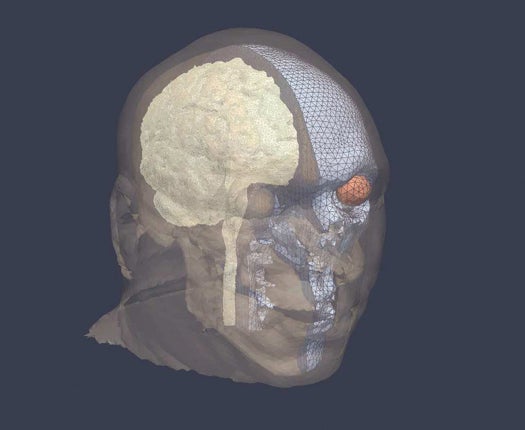 Just as the AK-47 rifle shifted the balance of power on battlefields the world over during the second half of the last century, the improvised explosive device (IED) has defined 21st-century insurgent warfare, allowing relatively low-tech warriors to inflict major damage on better-equipped conventional troops. IEDs have also left some 130,000 U.S. soldiers and marines suffering from traumatic brain injuries (TBI) that continue to affect them long after they leave the combat zone. But a new study by MIT scientists suggests that adding a simple face shield to standard issue combat helmets could significantly reduce brain injury in soldiers.

The face, it turns out, works like a conduit for blast waves moving through the skull and into the brain, where they can wreak havoc ranging from concussion to long-term brain damage and post-traumatic stress disorder. The researchers – a collaboration between MIT’s Department of Aeronautics and Astronautics and a neurologist at the Defense and Veterans Brain Injury Center at Walter Reed Army Medical Center – used MRI to model features of the head (including the skull, the brain, sinuses, and various bodily fluids) and then subjected those models to data on mechanical events like shockwaves.

By observing the way a chemical explosion impacts the head both with a combat helmet and without, the team deduced that while the Advanced Combat Helmet (the standard issue bucket for most ground troops) delayed the arrival of blast waves somewhat, it didn’t reduce the overall impact because waves could travel unimpeded through the face. But after adding a conceptual face shield to the simulation, the models showed a significant reduction in the amount of stress placed on the brain during blasts.

A face shield obscuring the most recognizable identifying human characteristic exhibited by otherwise identically uniformed soldiers might not do much to win over hearts and minds, and the image of Private First Class Dough Boy showing up to win one for the good guys could yield to imagery of sterilized, ubiquitous storm troopers. But none of that is really relevant if face shields do what the MIT team says they can do: keep soldiers safer and reduce the impact of IEDs.

Not to mention, it’s an aesthetic step toward the Spartan armor suite of future battlefields. Suit up, Master Chief.