Researchers at the Swiss Federal Institute of Technology in Lausanne are working on a project called SMAVNET, for “Swarming Micro... 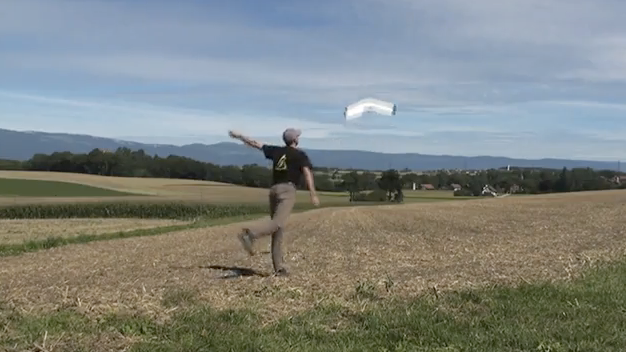 Researchers at the Swiss Federal Institute of Technology in Lausanne are working on a project called SMAVNET, for “Swarming Micro Air Vehicle Network,” to develop small flying robots that can be deployed in disaster areas to create communication networks. They say their network of swarming micro-drones is the largest of its kind.

Small drones are useful in disaster situations because they can fly over rough terrain and communicate easily, but if they’re going to catch on, they must be simple to design and use, according to the EPFL Intelligent Systems Laboratory.

Students built 1-pound plastic foam microdrones with 31-inch wingspans and outfitted them with electric motors, a Linux-based processor, GPS and a WiFi dongle. Then they had to design swarm algorithms.

First, the researchers used artificial evolution models to uncover unique control mechanisms, and reverse-engineered their findings. Then they turned to one of evolution’s best-studied social systems: Ants.

As the project’s Web site explains, the creatures deploy to search for and maintain pheromone paths that lead them to food. This behavior can be an analogue for deploying communication networks that would help rescuers, the researchers say.

Before being launched into the air Frisbee-style, the robots perform a self-check and calibrate themselves. They are monitored and controlled through a swarm interface running on a laptop.

To test their new system, students took 10 drones into a field overlooking Mount Blanc and watched them swarm. Check it out below.