Chinese workers built this country’s railroad system 150 years ago, laying track for less than $30 a month in a... 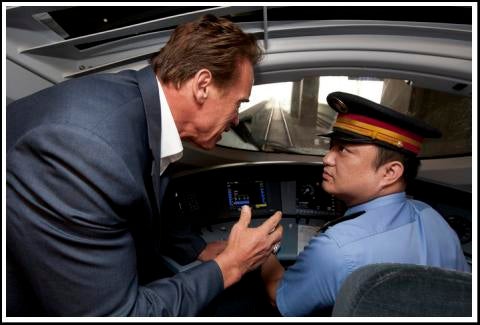 Chinese workers built this country’s railroad system 150 years ago, laying track for less than $30 a month in a grand effort to connect the coasts for the first time. Future railroad systems might also be built by the Chinese — or Chinese-owned firms, at least. California Gov. Arnold Schwarzenegger is hoping to spur Chinese interest in helping his beleaguered state build a new high-speed rail network. China has plenty of experience with high-speed trains.

On a trade mission to Asia this week, Schwarzenegger said he hopes China will invest in his state both in terms of financing and in bidding to work on the project. California is about $19 billion in the red, so “creative financing” is a must, the governor acknowledged.

Under the federal stimulus plan, California is getting $2.25 billion to start work on a a high-speed rail system that will carry 90 million passengers a year, especially between Los Angeles and San Francisco. California aims to finish it by 2030.

On Monday, Japan offered to loan funds to support the project, Bloomberg reported. Officials with the state-owned Japan Bank for International Cooperation didn’t say how much they would offer, but sizable loans will be needed — the project could cost $40 billion.

The stimulus awarded $8.5 billion to 13 regional high-speed rail projects, and most will require imported technology — though the U.S. leads the world in rail freight, the nation is far behind the rest of the world in high-speed passenger trains.

While flirting with China might not please American manufacturers, it’s a good idea to at least get some Chinese perspective. China’s high-speed rail network covers 4,300 miles — the distance from Anchorage to New York by car. And the country plans to stretch this network across Europe by 2020.

Schwarzenegger is also scheduled to view high-speed trains in Japan and South Korea.