In a First For Pacemaker Tech, Quail Embryo’s Heart Beats to the Pulse of a Laser

For the first time, scientists have used light pulses to control a living animal’s heartbeat, in a breakthrough that could... 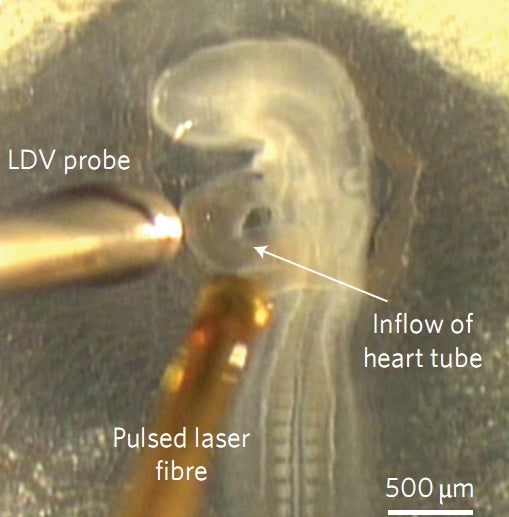 For the first time, scientists have used light pulses to control a living animal’s heartbeat, in a breakthrough that could lead to a greater understanding of congenital heart defects and even optical pacemakers.

Researchers led by Michael Jenkins at Case Western Reserve University in Ohio placed a laser fiber a millimeter away from a two-day-old quail embryo’s heart. Using laser pulses, they were able to pace the heart’s contractions, with no apparent damage to the developing tissue.

They think the light pulse creates a temperature gradient in heart tissue that opens ion channels in heart cells. This sparks an electrical impulse that makes the heart contract, according to a news release. The study is reported today in the early online edition of Nature Photonics.

The idea of controlling cells with light is not new, as Technology Review points out. Jenkins cites nearly a dozen previous studies that used laser pulses to pace heart cells in culture, as well as firing neurons with light. But this is the first time an entire heart in a living animal has been paced with light.

The method could be used to study and potentially prevent congenital heart defects, he says. Some researchers suspect that when the early embryonic heart beats slower or faster than normal, gene regulation changes, which alters development. Ensuring it beats at a normal pace could ensure healthy development of heart tissue, he says.

What’s more, light pulses could be used to drive an optical pacemaker, which would be less invasive than today’s implanted electrical devices. Electrode-based pacemakers and ventricular assist devices work well, but touching the heart with electronic contacts can weaken the muscle over time. Intrinsically modulating a heartbeat with light could be a better way.

The problem is that adult heart tissue is less transparent than those found in embryos, so it’s harder for the light to penetrate. Jenkins and his colleagues are working on this now in adult quail hearts, Tech Review reports.