EEG Scans May Be Key to Communication for Vegetative Patients

Brain-wave scanners might make it possible to communicate with people who are considered brain-dead, according to a new study reported... 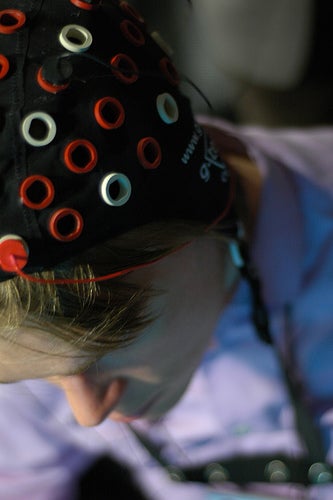 A study by British and Belgian researchers shows some patients declared brain-dead can still respond to commands. They think EEG machines could help these patients communicate once again. via Flickr/ delta avi delta
SHARE

Brain-wave scanners might make it possible to communicate with people who are considered brain-dead, according to a new study reported in the Economist.

A couple of recent studies have shown that a small minority of vegetative patients might be more aware than they seem. Now, Damian Cruse, with the Medical Research Council’s Cognition and Brain Sciences Unit in Cambridge, UK, thinks EEG machines will be able to help these patients communicate.

The team asked six healthy volunteers to wear electroencephalography (EEG) devices, which connect electrodes to a person’s head. They were asked to respond to an audible tone by imagining that they were squeezing their right hands or wiggling the toes of both feet. The researchers found that the volunteers’ brain responses were clearly different — the hand-squeezing activated the left-hand side of the brain and the toe-wiggling produced a response in the center of the brain.

They then tested the procedure on a patient with locked-in syndrome, who was almost completely paralyzed but retains some control of his eye movements. His brain responses were the same. Finally, they tested the procedure on a patient who had been declared vegetative two years earlier. They watched the EEG signals and were able to deduce which movement the patient was imagining.

Since the patients were responsive, they are not technically vegetative, the researchers say. Proof that they can communicate — that they’re not brain-dead — would have major implications for family members’ and doctors’ decisions about their care.