In a study that challenges the diagnosis of vegetative state, doctors found that the brain of a seemingly unconscious, vegetative... 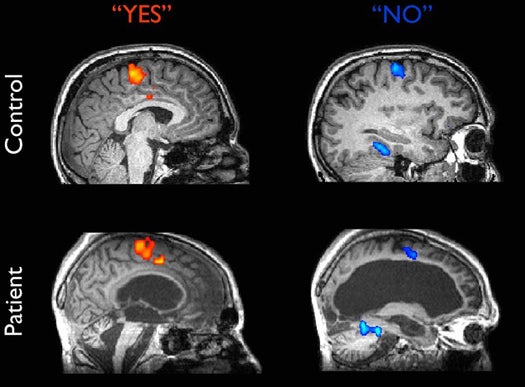 These brain scans show activity in response to a yes or no question. The similarity in activity between the conscious control subject and the supposedly brain dead patient call into question the diagnosis of "vegetative state". New England Journal Of Medicine, via The New York Times
SHARE

In a study that challenges the diagnosis of vegetative state, doctors found that the brain of a seemingly unconscious, vegetative man responded to yes-or-no questions in the same fashion as an alert, conscious person. This discovery not only complicates the medical definition of consciousness, but seems to call into question centuries of philosophy dealing with the nature of life and the self.

The study covered 54 patients in a supposed vegetative state. Of those 54, five showed some signs of consciousness. Three of those five showed the ability to deliberately respond to stimuli at bedside. Most amazingly though, one of the patients managed to answer a series of yes-or-no questions by altering his brain activity, as measured by a MRI machine.

The questions referred to the patient’s family, and included queries like “do you have any brothers?”. When the patient was asked “is your father’s name Alexander?” (it is), his brain assumed a configuration nearly identical to that of a conscious control subject saying “yes”. Similarly, when asked “is your father’s name Thomas?”, the MRI read brain activity identical to a control person’s “no” answer.

So far, wider communication remains impossible, although advances in brain implants may soon change that. However, as that technology enables more and more communication between the seemingly unconscious and the outside world, medicine and society will bump up against the problem of quickly defining consciousness for the sake of treatment, when any solid definition of the mind has eluded philosophers for millennia.

The New England Journal of Medicine