Did a Lunar Art Caper Put The First Museum on the Moon in 1969?

It turns out that the astronomical fame achieved by such popular modern artists as Andy Warhol, Claes Oldenburg, and Robert... 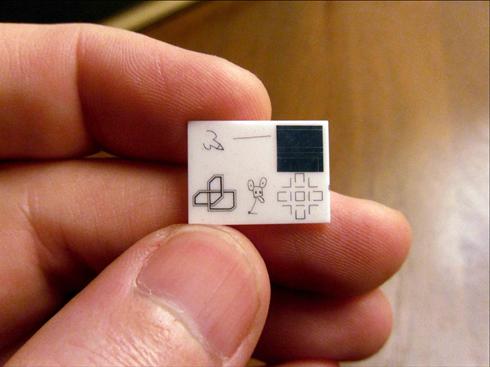 It turns out that the astronomical fame achieved by such popular modern artists as Andy Warhol, Claes Oldenburg, and Robert Rauschenberg might not be strictly hyperbolic. An interesting story picked up by USA Today suggests six popular ’60s artists may have snuck a tiny catalog of their work on board the Apollo 12 lunar lander, which still rests on the surface of the moon. If it’s indeed there, it’s the first permanent art collection in space; how very avant-garde.

This somewhat bizarre story stems from research conducted by Colombia University historian Gwen Wright, whose PBS show History Detectives unearthed evidence that a tiny, penny-sized ceramic chip etched with six sketches – one each from Warhol, Oldenburg, Rauschenberg, David Novros, John Chamberlain and Forrest “Frosty” Myers – landed on the moon with the Apollo 12 mission and is still there today.

That episode of History Detectives will air June 21 for those who are interested, but the show’s producers are publicizing the story now hoping the mysterious “John F,” the alleged Grumman engineer who planted the chip on the lander while it was still on the launchpad, will come forward.

A 1969 telegram from a John F. to Forrest Myers confirms the artwork made it on board the spacecraft. But two Bell Labs engineers with whom Myers was working were the ones who actually shrunk the sketches and etched them onto the chips, and it was they who passed the chip along to the enigmatic Mr. F. Those Bell labs engineers are now deceased, and Mr. F’s identity remains a mystery.

What’s more, another Grumman employee who served as launch pad foreman during the Apollo days says that launchpad crew regularly hid objects aboard moon-bound spacecraft as a means to personally connect themselves to the larger space race and the importance of the Apollo missions. So who knows what other artifacts from that golden era of space exploration might be sitting there on the lunar surface waiting to be discovered? Kind of makes one want to go back up there and find out.