ESA’s Herschel space observatory is about to celebrate its first anniversary in space, and in anticipation the European Space Agency... 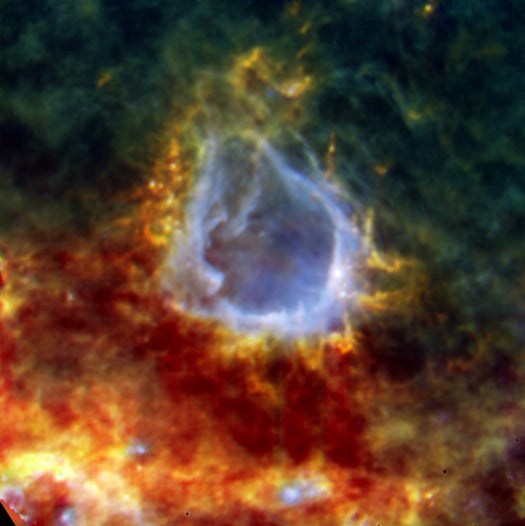 ESA’s Herschel space observatory is about to celebrate its first anniversary in space, and in anticipation the European Space Agency has given all of us a little gift. This colorful image of a giant bubble of gas and dust named RCW 120 was spotted by Herschel’s infrared sensors, but it’s not just the aesthetic aspect that’s exciting. The small white bright spot at the bottom fringe of the cloud is a young massive star still in formation, and it could provide us with unique insights into exactly how massive stars come to be. The image was presented this week at the Herschel First Results Symposium in the Netherlands.

At just a few tens of thousands of years old, the star has not yet ignited into the massive ball of nuclear fission that it will eventually become. But it’s eight to 10 times larger than our own sun, and with about 200 solar masses worth of gas and dust surrounding it, it promises to be cosmically beautiful birthing process. If it continues accreting like it is, it could well become one of the Milky Way’s biggest stellar bodies.

Spotting this object at all is a kind of triumph for Herschel, as massive stars in their early phases of formation are tough to detect because the dust and gas that are the fuel of star formation also obscure the process from view.

But what’s more, watching this baby star in RCW 120 could tell researchers a lot about how massive stars form, a process that is currently stuck in theoretical debate. Scientists know of celestial bodies that are 120 times the size of the sun, but many current theories on star birth have a hard time explaining how they can physically grow so massive.

Scientists now have a forming massive star to observe that will hopefully answer some long-standing questions. And you have a new wallpaper. The ESA has high-res images from Herschel here.