With the need for a cheap and abundant alternative to fossils fuels more important than ever before, the field of... 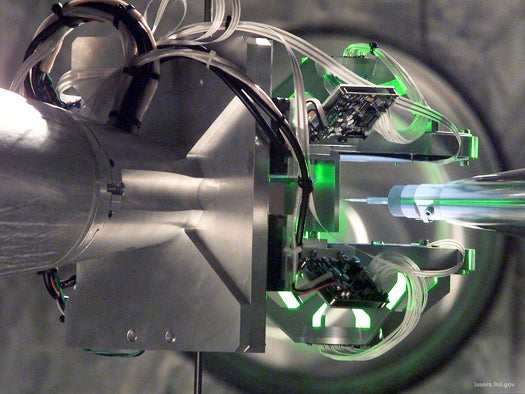 With the need for a cheap and abundant alternative to fossils fuels more important than ever before, the field of fusion energy is getting hotter. Really, really hot. 6 million degrees hot. Yes, the National Ignition Facility, the Department of Energy’s pet fusion project, has finally fired up its 192 lasers and zapped something, moving us one step closer to the day of clean, nearly free, fusion energy.

Writing in the journal Science, NIF scientists describe how their lasers, which occupy as much space as three football fields in Livermore, California, heated a small gold capsule up to 5.9 million degrees Fahrenheit. Had the capsule contained the hydrogen isotopes deuterium and tritium, that temperature would have been hot enough to cause a fusion-generating implosion.

The scientists measured the record-breaking temperature by looking at the X-ray radiation emitted by the imploding gold capsule. The data shows that the lasers are hot enough, and targeted correctly enough, to proceed to the next step: actual fusion.

Currently, there’s no date for when the lab will attempt to implode actual fusion fuel, but it will probably take at least a couple of months. In the meanwhile, to get an idea of the kinds of temperatures and energies the NIF scientists are dealing with, just take a look at that giant yellow thing in the sky.