The Kepler Space Telescope made headlines last week when it was announced that the planet-hunting instrument has already found its... 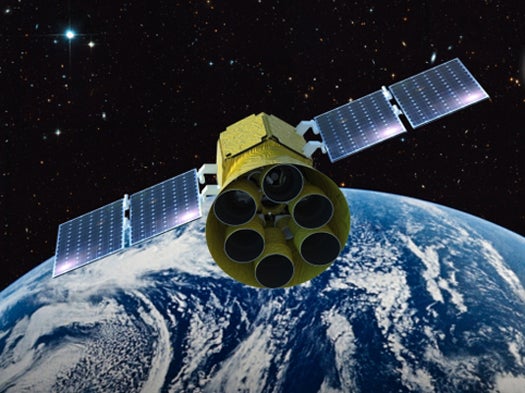 The Kepler Space Telescope made headlines last week when it was announced that the planet-hunting instrument has already found its first five exoplanets. Researchers at MIT, however, think they can do better. A satellite proposed by a team of researchers there could scan a piece of sky 400 times larger than Kepler, observing 2.5 million of the closest stars and discovering hundreds of small exoplanets, several of which may be suitable for life. That is, if NASA decides to build it.

The Transiting Exoplanet Survey Satellite (TESS) would be the first astronomical survey dedicated to detecting and cataloging transiting planets — planets that, from our perspective, pass in front of their stars, making them briefly visible to sensitive instruments. TESS’s six high-precision, wide-angle lenses would detect the small variations in light caused by a planet’s passing, recording the corresponding drops in star brightness. While TESS would measure the light curves for further number crunching back on the ground, its main function would be locating the exoplanets rather than observing them. Researchers could then point more specialized research instruments like the James Webb Space Telescope (coming in 2014) at distant planets to determine characteristics like mass, density and atmospheric makeup.

Using a blend of educated guesswork and established science, the MIT team estimates that TESS could locate between 1,600 and 2,700 planets within two years, though only a few hundred would be of the small, earth-like variety that gets the scientific community all riled up. Of those, just a few might be suitable for biological life, but that would be exactly a few more than we know of right now. Most known exoplanets (so far we’ve logged 422 of them) are so-called “hot Jupiters,” gaseous balls of heat that are uninhabitable to biological life forms.

Naturally, finding habitable exoplanets in our galaxy (or beyond) would be a major step forward for space exploration on the whole. But with Kepler already hunting exoplanets, it may be tough for MIT’s proposal to pass muster with NASA. The space agency already rejected an earlier incarnation of TESS but left the door open for the MIT team to submit an improved pitch later this year. A modified TESS proposal is in the works.