Intelligent Smelling Sensor Networks Can Pick Would-Be Terrorists Out of a Crowd, and Follow Them

Given the events occurring above Detroit on Christmas Day, public faith in airport security and its ability to screen for... 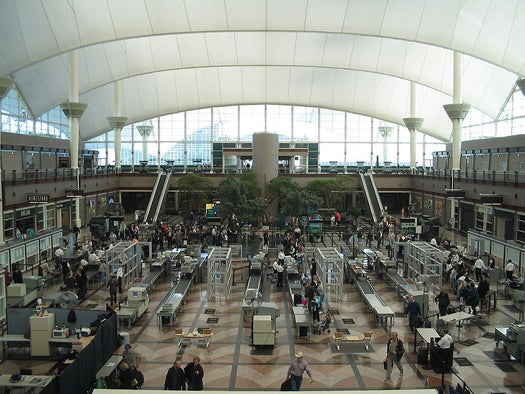 Given the events occurring above Detroit on Christmas Day, public faith in airport security and its ability to screen for 21st century threats isn’t exactly peaking. Perhaps what the TSA really needs is a shot of German ingenuity. Researchers at brain trust Fraunhofer Gesellschaft have developed a network of “chemical noses” that can not only smell explosive chemicals hidden on a person, but identify the carrier even as he or she moves through a crowded space.

Picture a couple of ill-intentioned types moving through a crowded airport terminal with — let’s just say for the sake of the scenario — undergarments laden with explosive materials. Sensors in the walls sniff out the offending substance, sending up red flags to security staff. As an offender moves through the corridor, the oscillating crystal sensor chips strung throughout the terminal pick up the scent, triggering in series and allowing security personnel to quickly plot the direction (or directions) the explosives are moving. But how do they pick out two subjects, possibly moving in opposite directions, out of a sea of moving travelers?

This is where the Hazardous Material Localization and Person Tracking (HAMLeT for short) system gets smarter than your average sensor network. HAMLeT’s data fusion process puts complex algorithms to work meshing security camera and chemical sensor data to ferret out the offending individuals. The more sensors an offender triggers, the more data the system crunches and the closer it gets to picking out the particular individual traveling along that path. In a trial with the German Armed Forces, the system accurately zeroed in on five “terrorists” carrying hidden explosives, no civilian heroics or emergency landings necessary.

Admittedly, the system currently has a tendency for false positives which, while better than false negatives, can make it cumbersome to deploy. But with some refinement of the algorithms and perhaps a mash-up with ever-improving face-recognition technology, systems like this could become commonplace anywhere large crowds gather, from airports to sports stadiums.