America’s beloved Bubble Wrap turns 50 today, proving that even ephemeral plastic bubbles can morph into a timeless invention. But consider that if the original inventors had their way, people would have used “Air Cap” as wallpaper — a concept that would have undoubtedly proved as fulfilling as the prototype model future homes of the 1950s.

Bubble Wrap represents perhaps the ultimate garage invention as the brainchild of New Jersey engineers Marc Chavannes and Al Fielding in 1960. Yet it only took off as fun air-filled shipping material after the wall decor idea died, and people soon discovered the joys of popping each air-filled bubble by hand, or en masse using their bodies or other implements.

Manufacturer Sealed Air Corp. has recognized the joy that its product brings by officially declaring this Monday Bubble Wrap Appreciation Day. Part of the celebration involves a limited one-day run of golden Bubble Wrap at the company’s Saddle River, N.J. facility, and the rest is presumably up to the end users. Do you store the golden Bubble Wrap for the grandkids, or do you indulge your inner child here and now?

It’s somewhat remarkable that a love of Bubble Wrap remains alive and well even in an age when the digital world’s allure may increasingly substitute for simpler worldly pleasures. Millions of Facebook users have declared themselves fans of Bubble Wrap, and Bandai has rolled out a virtual bubble-popping app for your iPhone or iPod.

So take some time today at work or at home to roll some Bubble Wrap between your fingers, find a satisfying air pocket, and squeeze. Tell your boss or spouse that it’s your privilege — nay, your right. But however you choose to celebrate this occasion, we would warn against sampling the Bubble Wrap anniversary cake. 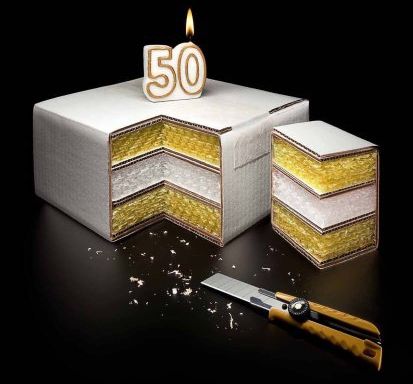 This cake is a lie