It turns out the Air Force’s next-gen bomber really isn’t much of a bomber at all. While the next iteration... 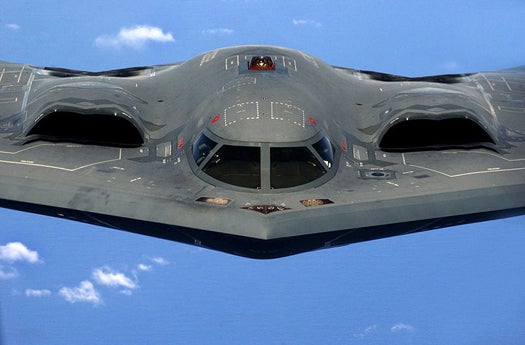 It turns out the Air Force’s next-gen bomber really isn’t much of a bomber at all. While the next iteration of stealth bombers is still but a sketch on the drawing board, the DoD and top Air Force command know what the wars of the next century will call for: intelligence, surveillance, and reconnaissance (ISR), as well as the ability to deploy non-kinetic weapons to disrupt enemy operations, all while reserving the ability to drop the occasional ordinance — and do it all at the same time with a single, stealthy super-weapon.

That’s not to say the next bomber won’t conduct any conventional bombing, but the Air Force is looking for something far more versatile than what our current fleet offers. For one, the Pentagon is working to tear down the barrier between intelligence and operations, instead looking for combat solutions that can gather intel, inform good decisions making and then implement combat decisions all in one stride (funding also dictates that a single multi-role aircraft is better than separate planes for recon and combat/bombing). Commanders also want to be prepared for conflicts in which America squares off with developed nations with advanced air defenses contesting U.S. air superiority.

The new plane will be a long-range intelligence and strike aircraft that can carry conventional ordinance as well as directed energy and network attack weapons. Directed energy weapons could include several currently under development, including laser weapons like Boeing’s Airborne Laser or pulse weapons that deliver directed doses of high-power microwaves. Other non-kinetic weapons could include communication and sensor jamming exotic-waveform weapons that can sever the connections between tactical weapons systems on the ground.

Of course, the relative success of unmanned aerial drones in Iraq and especially Afghanistan begs the question: should future bombers be manned or remotely piloted? Even in that the Air Force seeks flexibility. If they can make it work, commanders would like an aircraft that can be either manned or unmanned, depending on the nature of the mission and the variables involved. Having a human at the sticks ensures the ability to deal with an infinite number of scenarios, while the ability to go unmanned cuts down on manpower as well as risk of casualty.

So what we’re really looking for is an optionally manned/unmanned long-range intelligence-gathering, laser-firing, high-speed stealth bomber. It doesn’t sound easy, but it definitely sounds cool.