Is that a pheromone gland or are you just happy to see me? 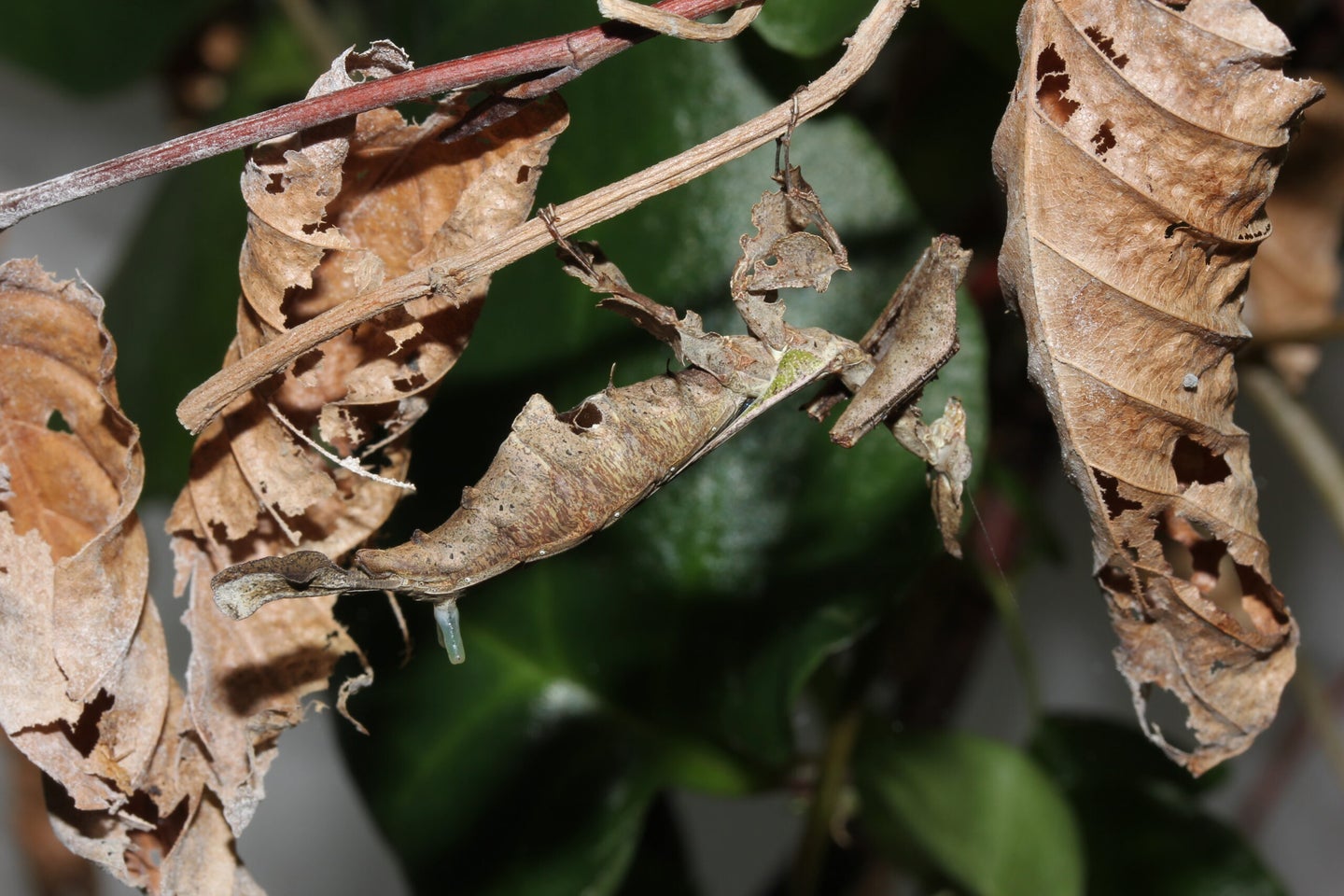 The Stenophylla lobivertex with its y-shaped pheromone gland sticking out. Christian Schwarz
SHARE

As he walked through the trails deep in the Peruvian Amazon, Frank Glaw stumbled upon a rather peculiar looking praying mantis in the dark. Through the light from his flashlight he could see there was something moving on its body.

Glaw’s first thought was that there was a parasite latched onto the mantis—a common sight that he has seen many times before in nature. It wasn’t until he brought in Christian Schwarz, in the faculty of biology and biotechnology at Ruhr University Bochum in Germany, that the pair realised that the odd protrusion was no stranger to the mantis but actually a part of its body. Their research, published in the Journal of Orthoptera Research showed that the protrusion is actually a pheromone gland being emitted by the female.

“There is no species which has had protrusive glands so far, so there were all limited to small spots or sub-elevations, but nothing that would be protrusible and movable, like in this species,” says Glaw, the curator of amphibians and reptiles at the Bavarian State Collection of Zoology.

In most species that have been studied, the pheromone gland is located between the sixth and seventh tergite, essentially a plate in the insect’s back. In this particular species, Stenophylla lobivertex, the pheromone gland stems from the same location but inflates into a six millimeter-long Y-shape and sticks out almost vertically from the praying mantis’ back. Each part of the Y-shape can also move around like a tentacle in the wind. The thin membrane has a greenish-blue appearance, only appears for two to five hours a night and instantly recoils when exposed to light or vibrations.

Without carrying out more research on the species, Schwarz and Glaw can only speculate as to why this might occur. For one, this species is pretty rare. It was only described officially in 2000 and to date only a handful have been found in the wild.

“Population density is probably low. It’s really rare and apparently difficult to find,” Glaw says. “In such situations the animals must find a way to meet each other and that is probably what the big advantage is for this species.” He speculates that the shape and increased surface area of the gland could allow a male to track which direction the pheromones are coming from.

All the specimens of these species have only been found in the months August to November, suggesting that they are only actively searching for sexual partners for four months out of the whole year.

“So far do we don’t know if this is just a selection bias, or if it’s really the time of year where you can find them [looking for a mate],” says Schwarz.

The rarity of this species might also be due to its reproductive strategy. Like us humans, it produces few offspring and invests a lot of time into them. “Most species like the Chinese mantis, put hundreds of eggs in these oothecae [its egg case]. This species doesn’t, it puts at most 30,” says Schwarz. “It also only makes like four to five of those ootheca during a lifetime and each one is guarded. The females sit on it and protect it from predators.”

Schwarz also studied a captive bred stock of three female mantises that did not last beyond the second generation. But he found that as a species, after taking four to five months to reach adulthood, the praying mantis lived for nearly six months to a year—an eternity in praying mantis time.

It’s possible that this nocturnal species is just trying to better its chances at survival. But for now, what happens in the dark rainforests of the Amazon will remain unknown for a while longer.