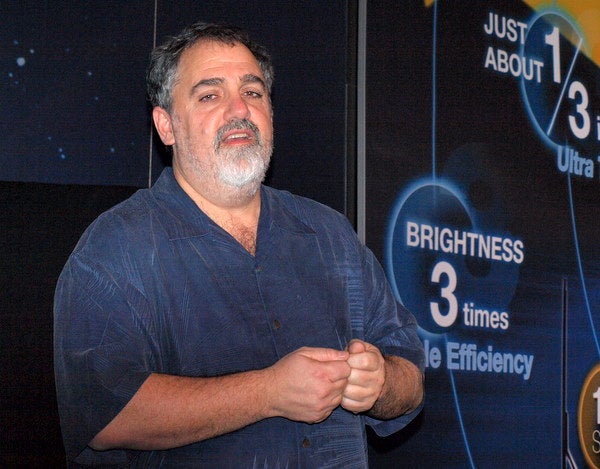 Titanic producer Jon Landau extols the potential of 3D films and explains he thinks they will be a hit in living rooms as well as theaters. Sean Captain
SHARE

3-D started its comeback at CES about two years ago when Samsung first showed capable rear projection TVs. At the time, 3D was just for video games, with only the vague promise that movies would be coming. On Wednesday in Vegas, Panasonic announced plans to push for technical standards that could show up in TVs and Blu-ray discs and players in less than two years. (Since Panasonic has a huge Blu-ray authoring division, it’s got the influence to make this happen.) And it enlisted moral support from Titanic filmmaker and 3D fanatic Jim Cameron.

The company showed off a prototype theater with modified versions of a Blu-ray player and its 8.5-foot plasma screen. As with other 3D TVs, the trick is to double the video frame rate from 60 to 120 per second and flash alternating left- and right-eye perspectives, while a pair of LCD shutter glasses exposes the left and right eye in synch with the screen images. Panasonic VP Bob Perry says they were able to get the frame rate high enough by boosting the speed at which the plasma pixels flash to 600 times per second.

3D material such as the animated flick Meet the Robinsons looked great, but it was nothing new. I’d seen equally good quality on Samsung and Mitsubishi TVs.

Some of the live action clips were really exciting, though. The best, it turned out, were ones in which the 3D effect was very subtle, just adding a little extra depth to the footage. Clips that pushed the 3D perspective, such as footage from the Beijing Olympics opening ceremonies, looked incredibly fake, as if cardboard cutouts of people had been placed in front of a painted background.

What 3D really needs to succeed is blockbuster content, and Jim Cameron promises to deliver it with his upcoming 3D magnum opus Avatar, due out on December 18, 2009. “Make no mistake about it, 3D is not a gimmick any longer,” Cameron said in a (two-dimensional) videotaped address at Panasonic’s press conference.

Appearing in actual 3D form was Cameron’s producer, Jon Landau who reiterated that Avatar would not be a gimmicky flick that uses 3D effects just because it can. “There are not gags that fly off the screen,” said Landau. “There might be moments where out of the narrative storytelling an object comes out of the screen…but it’s not for a gag.”

Neither Landau nor Panasonic reps announced any concrete plans to put Avatar or any other 3D films on disc, but the amount of pep talking from both parties makes it seem likely that if any movies do make it to Blu-ray, Avatar could well be the first of them.