Games for your future tech giant. 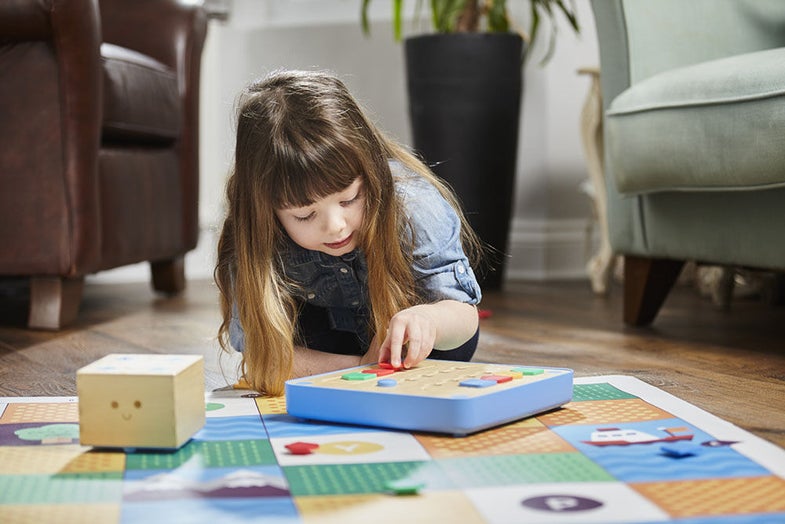 This story was originally published on WorkingMother.com.

In response to concern over kids’ interest in STEM (science, technology, engineering, and math), companies have been churning out cool toys that teach them coding and logic skills. The idea: get kids hooked on STEM early, and via their toys.

Since there are so many more STEM toys on the market these days, it can be difficult to figure out which ones will be the most worthwhile. Below, Working Mother’s picks for the best toys and games that teach the basics of coding. Your kid will be building her own robot in no time.

Jewelbots bring friendship bracelets into the 21st century; these pretty wearables can light up with LED lights when friends are detected nearby. Then, through the power of “if/then” statements, kids can program them through an app to do other things like light up or vibrate whenever they get a new like on Instagram. Using Arduino IDE, an easy, open-source electronics platform, wearers can come up with an endless number of programs. Ages: 9+ ($80, jewelbots.com)

Start of your kid’s collection of STEM toys with this electronic building block kit, which includes sensors, motors and 843 LEGO bricks. It equips kids to create five robotic friends: a moving and talking robot, a rover with a spring-loaded shooter and 3 other tool attachments, a guitar with pitch and sound effects, a moody cat that plays and purrs and an AutoBuilder that makes miniature LEGO models. Under the guidance of the accompanying Boost app, which contains all the directions and activities, kids will learn to code so that their robots perform specific actions. Best of all, kids can use the kit with the LEGO bricks they already own. Ages: 7-12 ($160, out in second half of 2017)

Elmoji, a colorful robot collaboration between WowWee and Sesame Workshop, uses the irresistible combination of Elmo and emojis to teach early coding skills to pre-readers. Using the free app, kids tap on emojis and other icons to program sequences of commands for the robot to follow (move forward, spin around, flash an emoji on the LCD screen). Switch to the various game modes to play music, solve mazes featuring other Sesame Street characters, drive the robot, and more. Ages: 3+ ($50, out in fall 2017)

If you’ve been putting off getting a pet, this build-and-play animatronic pooch might just scratch that itch. Literally. Kids determine their canine companion’s personality by programming more than ten activation points. Think: have Max chase his tail whenever his nose is pushed. With lights, motion, more than 400 sounds, and 100 eye animations, the combinations are virtually endless. App-based games add to the fun. Plus, we have to say it, your kids are gonna think he’s doggone cute. Ages 6+ ($120, out in fall 2017)

The self-balancing Siggy Scooter comes with one of four sassy, STEM-loving SmartGurlz dolls (Jen, shown here, is studying mechanical engineering, loves hot dogs, and likes to repair cars after school); other dolls are sold separately. Your real-life girl can read an e-book to learn more about the doll’s interests, then download the SmartGurlz app and use drag-and-drop programming to drive Siggy, solve coding-based missions, and play games. Ages 5+ ($80, out in summer 2017).

Put kids’ critical-thinking and problem-solving skills to the test without a tablet or app—and teach basic coding in the process. First challenge: Choose one of 10 double-sided activity cards, then build the maze shown. Second challenge: Use the 30 double-sided coding cards to create a step-by-step path for Colby the mouse to follow through the maze. Enter that sequence into Colby and watch as he races to get to the cheese. Repeat. Ages 5+ ($60, learningresources.com)

This is the robot sidekick tweens and teens have longed for since R2-D2 took the big screen by storm. Customizable programming—including drag-and-drop coding—and artificial intelligence combine to create a ‘bot that can not only guard a bedroom door but also learn a child’s favorite color, recognize a pet, and remember—and later talk about—activities and games he played with his human pal. Plus, kids get to build M.A.X. to boot. Ages 10+ ($150, out in fall 2017)

The segments of this cute little insect are really embedded with tiny commands: turn left, turn right, make a sound and so on. Kids can separate and re-connect them in any order, and the Code-A-Pillar will run through the sequence—and show toddlers the fundamental basics of coding. Ages: 3–8 ($50, amazon.com)

With Primo Toys’ Cubetto, kids can learn to code before they learn to read. Colorful blocks represent commands for a square, smiling wooden robot to follow in sequence (like move forward, or turn 90 degrees), and a related book and map comes with activities to put Cubetto through its paces. The child-centered, problem-solving nature of Cubetto means it’s Montessori-approved. Ages: 3+ ($225, primotoys.com)

Kids as young as 4 can build (and decorate) their own robots with Kibo. Once it’s built, they can create a sequence of instructions with Kibo blocks, use the robot body to scan the program, and push a button to make the robot come to life. Ages: 4–7 ($230–$400, kinderlabrobotics.com)

Ozobots are tiny, 1-inch-tall robots set to roll around on different surfaces, be it a tabletop or a tablet screen. Beginners program the robots’ paths with color: They’re set to follow lines that are drawn, either paper or on screen, and different colors correspond to different commands. As kids get older and more advanced, they can control the Ozobots with pre-set blocks of code powered by Google’s Blockly. Age: 5+ ($60 for starter pack, amazon.com)

Dash is a mobile robot; Dot is a stationary one. Kids can use a suite of apps to control them, making Dash run around the room, having Dot blink her lights and so on. The apps—which vary in complexity, the most advanced running Google’s Blockly—also present puzzles and challenges kids can solve by programming Dash and Dot. Ages: 5+ ($50 for just Dot, $280 for both robots together and the wonder kit, amazon.com)

The Sphero SPRK Edition—from the makers of the holiday season’s highly coveted BB-8 toy—is controlled through an app; younger kids can play the app’s games to get the basics of coding procedure. Then, as kids get older, they can use Sphero’s own visual, C-based language (called OVAL) to command the robot through blocks of code ($130, amazon.com)

Linking the real world with the virtual one, Puzzlets lets kids arrange tiles on a cloud-shaped board that hooks into a tablet. The way the tiles are arranged programs the way game characters move within the world of an app-based game on the tablet. Age: 6+ ($100 for starter pack, amazon.com)

Why settle for just software? Kano lets DIY fans and mini-makers start by building their own computers first, with a kit that doesn’t require an engineering PhD to master. Once it’s assembled, they can move on to move on to playing with code to operate it. Ages: 6+ ($150 for computer kit, amazon.com)

You don’t need any electronic equipment to become a master of coding. Code Monkey Island is a board game that teaches the fundamentals of programming without any robots or tablets. The cards that govern how many spaces the players move use conditional statements, Boolean operators and strategic thinking, all of which relate to the underlying logic of coding. Age: 8+ ($35, amazon.com)

With Microduino’s mCookie kits, you can build, you can program and you can connect it all to your Lego blocks—what more could a STEM kid want? The components are magnetic, so they don’t require any soldering or wiring to build. Beginners can then use open-source Scratch code and “drag-and-drop” programs to bring their creations to life. Ages: 8+ ($100 for basic kit, amazon.com)