The first flyby of Ganymede in more than 20 years promises a close look at the giant moon’s icy surface. 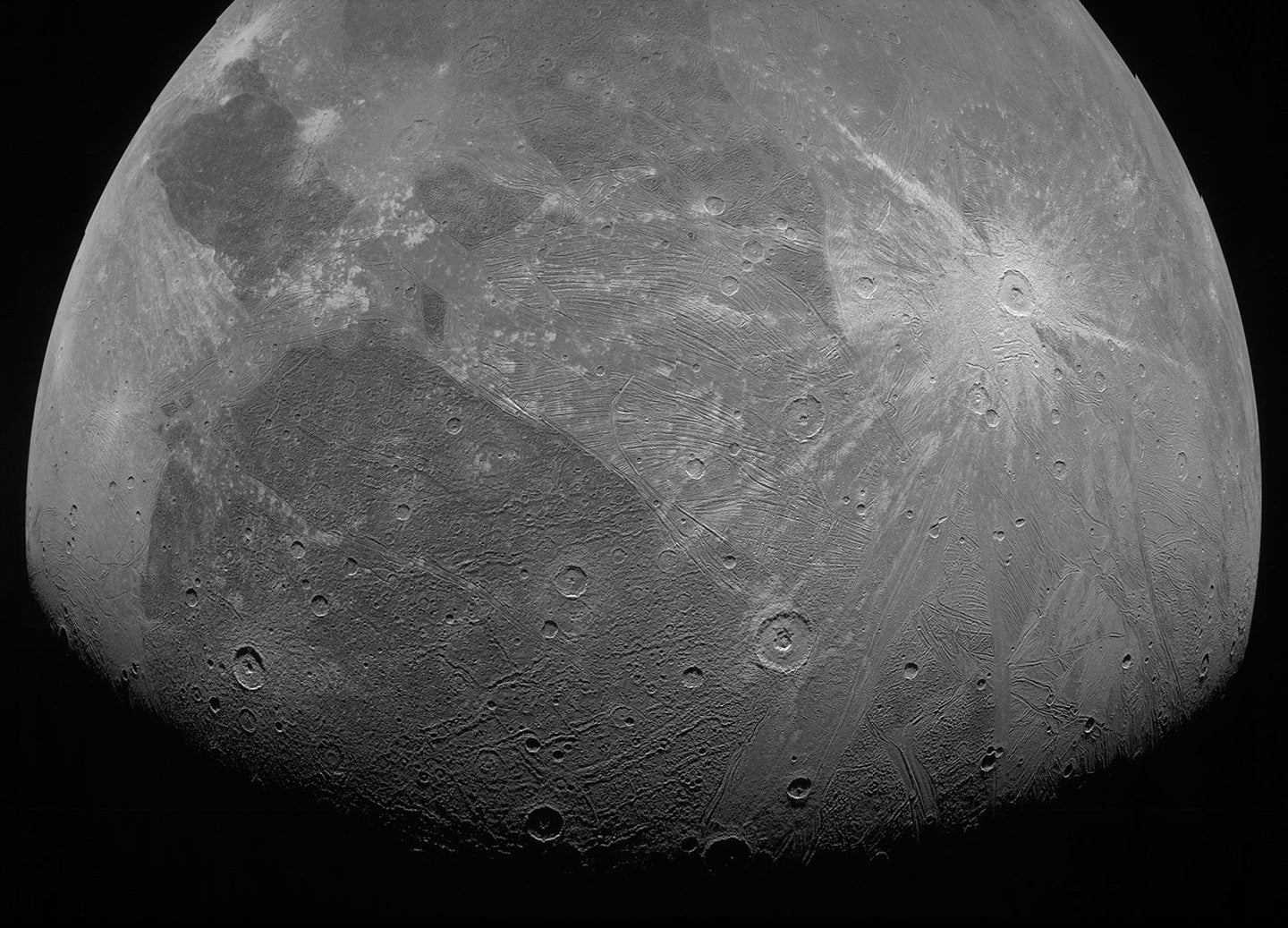 Ganymede is the largest moon in the entire solar system. NASA/JPL-Caltech/SwRI/MSSS
SHARE

In ancient mythology, the Roman god Jupiter uses a veil of clouds to conceal his mischief from his wife Juno. NASA’s Juno spacecraft has spent three years looking beneath the clouds of our similarly secretive and distant planetary neighbor, Jupiter. But recently, Juno got up close and personal with a different celestial body.

Juno’s original mission was to learn about Jupiter’s formation, magnetic field, and composition under its surface clouds. But in its extended mission, it’s going far beyond that. On Monday, June 7, the spacecraft shot past Jupiter’s Ganymede—the largest moon in the solar system—snapping a few quick but iconic images and taking readings of the moon’s magnetic field from just over 600 miles away.

The team of scientists running Juno is just starting to analyze the data, says Scott Bolton, the head of the mission and a space scientist at the Southwestern Research Institute. But they’ve already posted two close-up pictures which show the icy moon’s cratered and craggy surface in detail.

The flyby was the closest look we’ve had at Ganymede since the Galileo mission 20 years prior. One image was taken by JunoCam, the craft’s signature camera, but the other was taken by a navigational camera which, through clever use, was also able to measure radiation levels near the Jupiter moon. As the camera took pictures, charged particles would hit its sensor, leaving little dots, squiggles, or streaks in the image that scientists could use to approximate radiation levels.

The use of a navigational camera for this measurement “is one of the aspects that does surprise me,” says Xianzhe Jia, a space physicist at the University of Michigan who has studied Jupiter’s moons and planetary magnetic fields but was not involved in the Juno mission. As the saying goes, one instrument’s noise is another’s instrument’s signal, he says.

It’s part of the Juno team’s philosophy to squeeze every possible bit of science from the craft, Bolton says. “We look at every engineering sensor and think, ‘What can we do with it scientifically?’ It’s giving us some kind of data.” For example, when a camera unintentionally caught the impacts of dust particles on Juno’s solar panels, that “serendipitous” data helped scientists gain new insights about zodiacal light and the inner solar system’s dust cloud.

The Juno team also used a method called radio occultation. But fear not—it has nothing to do with satanic rituals. Instead, it measures the moon’s ionosphere, a section of its thin atmosphere where radiation knocks the electrons off gas molecules. To do this, Juno sends a signal to Earth while positioned behind the moon’s atmosphere, so that it passes through Ganymede’s ionosphere and on to a receiver on Earth in Canberra, Australia.

The charged particles in the ionosphere nudge the frequencies of the signal such that the team can, through a kind of reverse engineering, learn about the magnetic field causing the interference. The technique is common, Jia says, “but it highly depends on the geometry of the flyby.” To work, the objects need to line up perfectly, with a straight path between the craft, the magnetosphere, and Earth.

The magnetic environment around Ganymede is particularly interesting, Jia says, because it’s a small magnetosphere within a large one—that of Ganymede bubbled inside that of Jupiter. That makes it a natural laboratory to study plasma physics, he says.

[Related: Texas-sized plasma ‘cannonballs’ could help solve one of the sun’s biggest mysteries]

Other mysteries abound when it comes to Ganymede. For one thing, images show lines that scratch across the ice on its surface—and we aren’t sure what caused them. Tectonic faults could have caused these features, Bolton says, or some other process. For all we know, they could still be forming, he adds.

Bolton is most excited about the microwave measurements Juno captured during the flyby, which will make a map of Ganymede’s surface using six different wavelengths. “That’ll be really the first detailed map of the ice,” Bolton says.

The microwave readings could tell us about “the composition of the ice, the temperature of the ice, possibly the thickness of the ice,” Bolton says. The team will compare readings across the light and dark regions of the moon’s surface, and across craters and those mysterious tectonic lines.

Soon, the team will share more images from the flyby, Bolton says, and the curious among us can download and toy with JunoCam’s raw images themselves. He’s excited to see what the community does with them.

Juno’s flyby also serves as a run-up for two other missions that will explore the Jovian moons. NASA’s Clipper mission will target Europa, and the European Space Agency’s JUICE (JUpiter ICy moons Explorer) will study Ganymede, Callisto, and Europa. Juno’s data will help both teams plan their missions, and because the sensors carried by each mission differ, Bolton says, “We complement them as well.”