Tech in Training: The Search for an Online Coach

On finding an online marathon-training plan in the unlikliest of places: The Old Gray Lady. 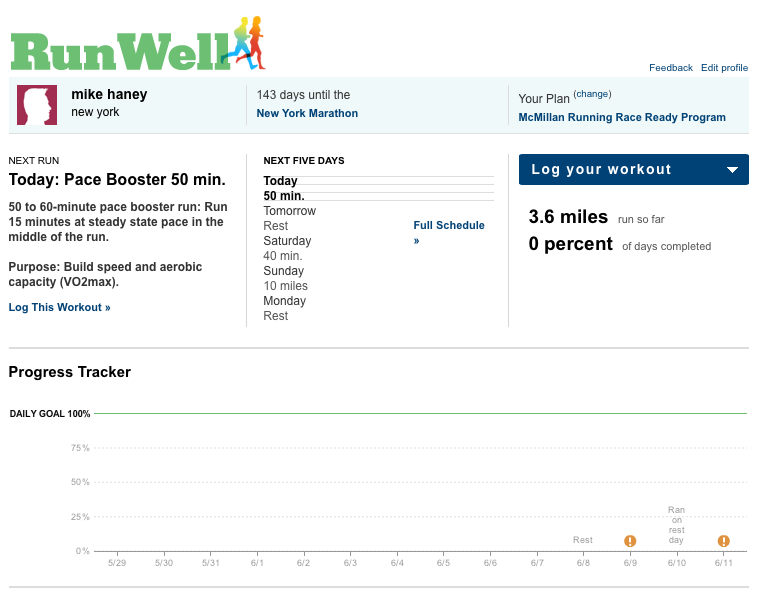 I don’t run for the pure spiritual joy of it, or for the sense of community or with hopes that I’ll ever win anything. I run so that I can cook with as much butter and eat as much BBQ as I want, without worrying about my gut or my arteries. So when there’s a marathon on the horizon, I need a plan that tells me when to run and for how long. Lucky for me, the New York Times just got into the coaching business.

The Times’s new interactive feature, Run Well, offers marathoners at any level—beginner, intermediate or advanced—four to six different training plans designed by professional coaches, such as Jeff Galloway, a former Olympian, and Bob and Shelly Glover, who designed the official training schedule for the New York Road Runners.

As anyone who’s sought out training advice will tell you, there are dozens of ways to prepare for a marathon. The Times presents the programs side-by-side, broken down by longest run, days of training per week and what kind of runner each is suited for—something that’s surprsingly hard to find elsewhere but is crucial to picking the right one (that is, one you’ll actually follow). Once you choose a plan, it gives you the full schedule (mine is 18 weeks long and officially starts next week), and lets you customize workouts and move them around. You can also track your runs, which it fills in on the schedule.

I’ve used other online training tools, including the highly graphic one from Nike+, but Run Well’s flexibility and simplicity makes it my favorite so far. It’s also, conveniently, on a site that’s constantly open in my browser anyway, so it’ll be harder for me to “forget” the week’s runs.

I chose the training plan from Greg McMillan, a professional running coach and physiologist, because the description says it’s based on the latest sports science. More on what that means from the plan’s creator next time.