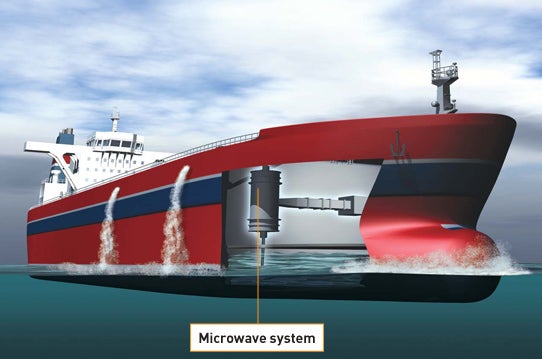 Transoceanic freighters haul 80 percent of the world’s commercial goods. But those boats inadvertently carry destructive cargo as well. An empty ship can suck up more than 10 million gallons of water to stay balanced as it crosses the open ocean. Upon its arrival into another port, the crew pumps the ballast water and any small animals or plants living in that water—sometimes thousands of organisms per gallon—into foreign harbors, where they invade and damage local ecosystems. “We estimate, conservatively, that there are at least 5,000 species moving around the world daily in ships’ ballast water,” says James Carlton, a marine ecologist at Williams College.

Now, Dorin Boldor, a bioengineer at Louisiana State University’s Agricultural Center, is devising a high-powered microwave that nukes aquatic hitchhikers before they’re flushed out. Adapted from a microwave technology traditionally used to pasteurize sweet potatoes, the system purifies the ballast water for as little as one dollar per 250 gallons of water, less costly than other treatments like scrubbing ship hulls and spraying pesticides.

Foreign marine species, from bivalves to fish, have taken hold across the U.S. Over the past 150 years, 300 alien species have dramatically altered the biodiversity of San Francisco Bay. In the Chesapeake Bay, millions of snails from Japan prey on the region’s shellfish. And in the Great Lakes, the long tails of spiny water fleas, originally from Northern Europe, tangle fishing lines. America spends more than $1 billion a year trying to control such invasions both in the sea and on land. Still, hundreds of invasive species survive to flourish in their new homes.

Pending additional funding from the National Oceanic and Atmospheric Administration and approval from the Coast Guard, Boldor says shipping contractors could be zapping critters within a year.

Launch our gallery to see the worst invasive species. And turn the page to see how ships will be able to nuke marine organisms. 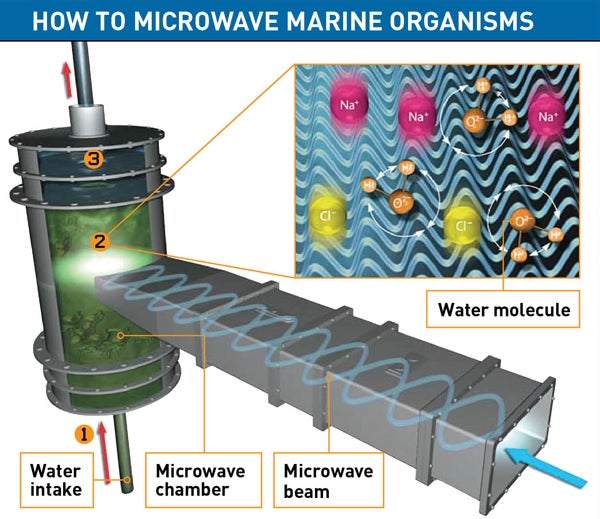 1 As the crew takes on cargo, the ship pumps ballast water, and any marine life in it, from the ballast containers into 20 or so refrigerator-size microwave chambers.

2 A microwave beam produces an electromagnetic field that oscillates 915 million times a second, the optimum frequency for heating water. Water molecules try to align their electric charges with the field, but because it rapidly changes direction, they end up spinning very quickly. Similarly, charged sodium and chloride ions in the water bounce back and forth in an attempt to align with the field. These erratic movements generate friction, which heats the water to 140°F and kills any organisms in two minutes.

3 The hot water flows through a heat exchanger to preheat the cold water coming from the ballast water tank, which also cools the microwaved water to a temperature safe for discharge into the ocean.

Launch our gallery to see the worst invasive species. 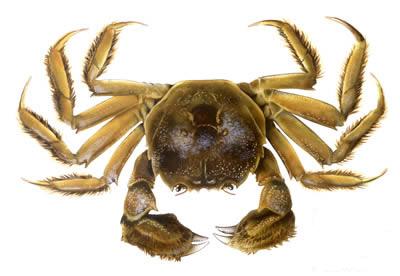 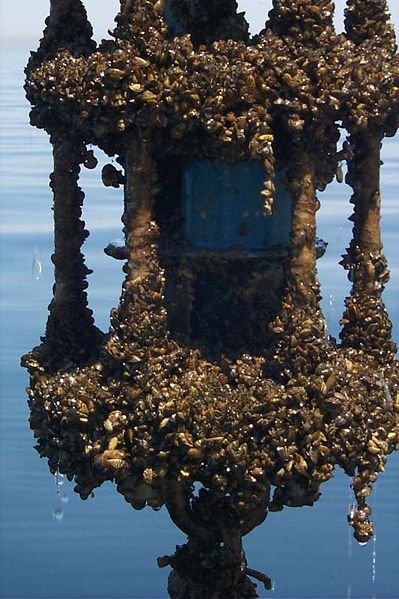 The Invasion: Arrived in the Great Lakes from Europe in 1988 and hit California this year. Bad Habits: Smothers native mollusks and clogs water pipes, costing millions annually in cleanup.

The Invasion: Eurasian container ships brought it to the Great Lakes in 1995. Bad Habits: Feeds on the eggs and young of lake trout, threatening an economically significant fishery. 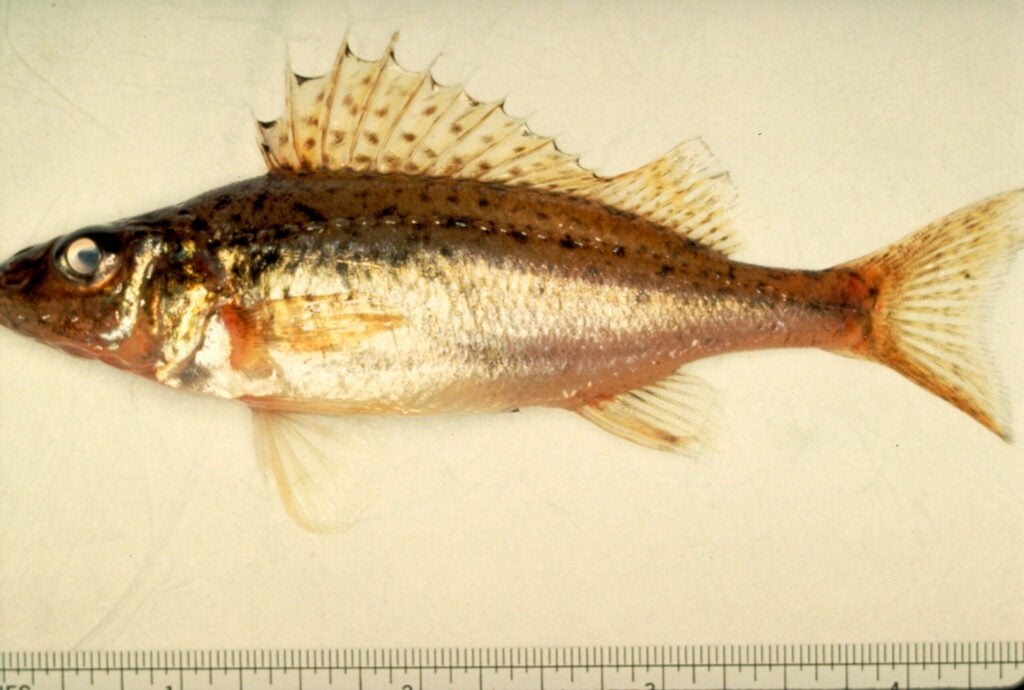 The Invasion: Introduced in 1985 in Lake Superior from Eurasia. Bad Habits: Now the most common fish in the St. Louis River, the ruffe eats up food sources relied on by commercially valuable natives.
august 2008
invasive species
microwaves
shipping
ships